Chris Algieri has proven to be an adoptable fighter as he moved away from his usual boxing maneuvering and fought an attacking style against the favorite Amir Khan.  Algieri has fought three of the top fighters in the welterweight division defeating Ruslan Provodnikov in a close controversial decision and losses to both Khan and Pacquiao 다운로드.

The fighters that Algieri may end up resembling career wise are Mickey Ward and Arturo Gatti, two good fighters who often fell short when they faced the top fighters but had an excellent records and even a few titles to show for their career 세움터 도면 다운로드. Algieri showed that he could be competitive against the top talents but twice he has fallen short.  If nothing else, Algieri will have a good career but he may have reached his peak as a fighter.  Like Gatti and Ward, he may prove to be a good fighters with some impressive wins but he is not going to be an elite fighter. I am not comparing Algieri to either fighters’ styles or even assuming that he is as good of a fighter as either one.   My point is that both of these fighters had a good career and produced memorable fights but when Gatti fought Mayweather and De La Hoya; both fighters easily beat him.  Algieri may show himself to be a similar fighter at the end of his career; capable of occasional upset, participate in some classic matches but in the end, he will not be an elite fighter.  Gatti is a Hall of Fame fighter but he was never in the same league as Pacquiao, Mayweather or De La Hoya at his peak.

Khan won most of the early round but Algieri pressure style allowed him to garner momentum as he consistently nailed Khan with right hands and vicious shots to the body.  The saving grace for Khan is that Algieri does not have great power as his eight knockouts in 20 victories would attest.   Khan showed his wiles as he often held Algieri to slowdown Algieri attack.  This was not an impressive Khan performance as he boxed and moved out of harms’ way but no knock downs. Algieri is not use to be a pressure fighter and often he failed to cut off the ring effectively; this allowed Khan to escape the pressure.  Over the second half of the fight, Khan slowed down enough  and Algieri trapped him on the rope. 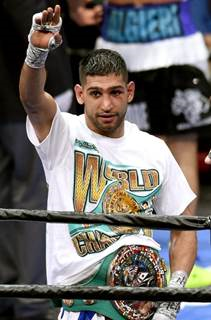 The judges had the fight 117-111, 117-111 and 115-113 and I agreed with the latter score.  Each round was competitive but Khan hand speed and combinations efficacy proved to be difference.  Now where does this leave either fighters?  Algieri did not hurt himself with this effort but he also showed his limitation.  Against Provodnikov, his boxing skills allowed him to survive the early rounds and win the bout but he did not have the hand speed or power to be able to defeat neither Pacquiao nor Khan.  He is an entertaining fighter who will give his best but he does not have the hand speed or power to compete with the upper echelon fighters.

Khan did not impress enough to force Mayweather to think of him as a future opponent and others like Keith Thurman and Kell Brook in the division have to be thinking that the Khan they saw against Algieri would be the their perfect opponent. This is a bout that could make some serious money for Thurman and Brook plus put them in position for a bigger bout like maybe Mayweather.

This was a big fight for Khan and he needed not just to win but he had to win impressively and stop Algieri but he failed to do either.  He simply won by using his hand speed and maneuverability against a tough opponent in the opponent’s back yard. The old saying that a win is a win did not compute in this bout as Khan’s failure to dominate his opponent hurt his marketability.