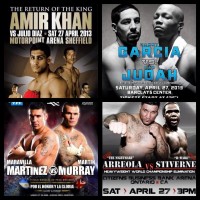 By Tom Donelson
Member Boxing Writers Association
****************************************
Last Saturday Night, Boxing went around the world in five fights beginning with a pouring rainstorm in Buenos Aires. Sergio Martinez came home to the adulation of some 45,000 plus fans as he faced Martin Murray and although he was the overwhelming favorite, the 38 year old Martinez had just recovered from a knee surgery nor was Murray an easy fight 다운로드.
Martinez darted in and out with sharp combinations while Murray seemed content to keep his hands up while attempting to walk Martinez down in the early rounds.  At the end of the fourth round, Murray landed left hooks for his first burst of offense and from there, Murray strength started to take hold.  Martinez left hand would connect but they had little effect on Murray while Murray punches showed its effect upon Martinez.  Murray took hold of the fight between the fifth round and the tenth round, which included a Murray knockdown of Martinez in eighth round bitdefender 다운로드.
In what was supposed to be a grand celebration of Martinez coming back to his native Argentina proved to be a dramatic battle of survival as Martinez faced losing his title to Murray with two rounds left.  Two things would cost Murray a shot at the title 다운로드. The first was a knockdown ruled a slip in the tenth round which cost Murray a second 10-8 round. The second was a strategic blunder by Murray who did not push the action against an exhausted and injured Martinez.  Martinez put everything he had left by boxing and throwing combinations. While many of these combinations were blocked by Murray defense, Murray did not show the activity needed to take the championship from the reigning Middleweight champ in his hometown.  Martinez squeezed out a unanimous decision but he showed the effect of his 38 years of age and past injuries.  Martinez reinjured his knee and hurt his left hand according to his corner; showing that maybe it is time for Martinez to say good-bye.  Murray had the Middleweight crown within his reach but he failed to take that next step in becoming an elite fighter.  He had victory within reach but his cautious nature ended his shot.

From Buenos Aires to Ontario, California, Chris Arreola faced one of those crossroad fights that could produce a title shot.  Standing in his way was Bermane Stiverne.  Arreola used his jab and forced Stiverne on the rope while unleashing his right hand but over the last minute of the third round, Stiverne showed mobility and countered with solid combinations of his own.  The fight changed with one punch as the third round ended.  Arreola attempted a left jab but his left hand waas low and Stiverne took advantage by unleashing a right hand that sent Arreola down!  Arreola staggered back to his corner.  Arreola came out in the fourth round with blood flowing from his nose and from that point, Stiverne took control of the fight as he used the entire ring to maneuver himself into position to launch combinations against Arreola.  Arreola got pounded from the fourth round on. Arreola became more of a punching bag as the fight progress. Arreola showed courage but it was Stirverne whose boxing skills won the day.  Arreola career suffered another setback but he does have one thing in his favor, he can still bring a crowd.

Leaving California, the boxing fan could travel to England where Amir Khan faced former lightweight champion, Julio Diaz.  Over the first three rounds, Khan quickness and punching power dominated the action but in the fourth round, a Diaz left hook sent Khan down for an eight count. Khan managed to get up and boxed his way to the fifth round.  Khan continued his boxing skills through the ninth round and built up a big lead.In the tenth round, Diaz staggered Khan twice with left hooks and right hands. Diaz threatened Khan again in the eleventh round with more power shots.  Both fighters unleashed powerful combinations in the final round and Khan’s fans held their breath.  Khan survived the round and won a unanimous decision. This fight showed all of Khan’s strength and his vulnerability that makes him an exciting fighter.  Diaz pushed the action over the last three rounds and nearly pulled off the upset.

Across the pond and in the Barclay Center, Brooklyn native Zab Judah faced Danny Garcia for Garcia title.  Before the main event, Peter “Kid Chocolate” Quillin pounded Fernando Guerrero over seven rounds. Quillin was the better fighter but he also got nailed by some solid shots; leaving one with the questions, what will happen when Quillin faces a big puncher?

Danny Garcia dominated the first two-thirds of the fight as he pounded Judah with his right hand. Throughout the fifth and sixth round, Judah showed heart by simply refusing to go down despite being staggered repeatedly by Garcia’s right hand and in the eighth, Garcia sent Judah down for an eight count   In the tenth round, Judah found a second wind and pounded Garcia over the last three rounds  Just as Diaz rallied against Khan earlier in the day over the final three rounds, Judah won the last three round against the champion.  It was not enough to win the fight as Garcia domination over the first nine rounds put enough rounds in the bank to withstand the big rally.

Over three continents, boxing fans saw five dramatic fights.  We saw an aging champ, Sergio Martinez finding a way to win a close contest by gutting out the final two rounds.  Amir Khan nearly lost a fight that he had in the bag as he was staggered throughout the final three rounds. Khan showed guts in surviving but he also show why he is one of boxing exciting fighters.  Khan has talent and power but he also has a suspect chin.  Chris Arreola always seemed to be on the cusp but there is that big fight that keeps setting him back.  Arreola was the heavy favorite and all he had to win in order to have one more shot at a title. Stiverne victory will delay. if not end Arreolo shot at a title.  Zab Judah may have lost to Garcia but he showed heart and grit as he came back over the final three rounds in a fight in which he was dominated early.

There was plenty of drama as Sergio Martinez was in danger of losing his champion and Khan nearly saw his career as an elite contender derailed.  Arreola showed heart but it was Stiverne who skills won a key heavyweight division and finally, Judah showed that sometimes guts and will can keep a fighter in a fight.