*** FLASHBACK – this article originally appeared on dmboxing.com on May 26, 2012 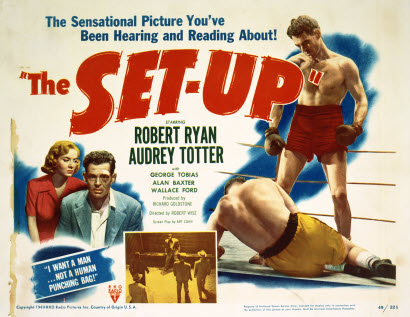 I am often asked about boxing movies, and which one is the best. My personal best is Raging Bull, but a close second is one that nobody talks about except me and that movie is “The Set-Up” (1949) starring Robert Ryan 웹 크롤링 다운로드.

In “The Set-Up,” Robert Ryan plays an aging fighter who is brutally punished for refusing to take a dive adobe reader 11 다운로드. The plot line has been used many times in boxing movies, but the beauty of this film is it captures the corrupt underworld in the golden era of boxing and Ryan is nothing less than brilliant in the lead role. Ryan himself was a collegiate boxing champion at Dartmouth.

The movie is directed by Robert Wise who has directed such outstanding films as The Day The Earth Stood Still, West Side Story, Run Silent – Run Deep, The Sound of Music, The Sand Pebbles, The Hindenburg, and The Andromeda Strain, just to name a few.

I fully recommend this film to any boxing fan. “The Set-Up” is worth viewing, as I consider it to be one of the best films on boxing that I have ever seen!