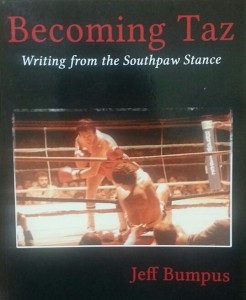 In 1984 a young 140 pound fighter from the Midwest entered the ranks of professional boxers with the dream of becoming a world champion 맨헌트. He was a straight forward, no nonsense southpaw who would throw punches from bell to bell. In a nutshell, he was a crowd pleaser. It was this style that earned him several appearances on the ESPN and USA cable boxing networks 다운로드. His name is Jeff Bumpus and he carried the nickname “The Tazmanian Devil”. He would eventually learn that his dream would not become reality.

Jeff Bumpus has written a fine book titled “Becoming Taz ; Writing From The Southpaw Stance”. Jeff takes you on a trip through his career that spanned from 1984 to 1993. A career that saw him cross gloves with five world champions and several contenders. It is a book about the travels of a boxer who went from prospect to journeyman. Despite losing to the likes of Greg Haugen, Vinny Pazienza and the great Julio Cesar Chavez, Jeff always gave a good account of himself. He was no pushover. That is why the networks loved him.

The book itself is a fine read. Jeff mixes brutal honesty with a dash of humor as he tells about his journey as a professional boxer. The book reminded me a lot of former middleweight contender Fraser Scott’s fine book “Weigh In” that came out in the 1970′s. Minus the sour grapes. Yes Jeff had his issues with the boxing establishment but he did not dwell on it. That is just the way it was.

I highly recommend this book to add to your boxing library. It has 191 pages with several photographs included. This stiff cover book is available for $12.95 with free shipping in the U.S. Contact editor@canopicjar.com for more details.