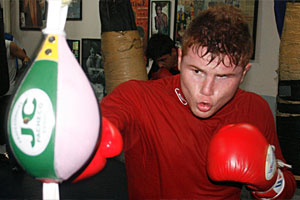 While much of the boxing world focusing on the aftermath of the Pacquiao-Mayweather fight, what is being missed are the young boxing stars making their marks.  Saul Alvarez is one of those stars and his three round demolition of James Kirkland showed a young fighter developing into a star.  Since his loss to Mayweather, he won three in a row, two knock out victories and a close split decision victory over Erislandy Lara 다운로드.

Despite being 24 years old, he is now 45-1, with his only loss to Floyd Mayweather.  While many pundits are not sure how to rate Mayweather, one milepost to judge him will be the career of Alvarez.  If Alvarez becomes an elite fighter in his own right, this certainly enhances Mayweather’s own legacy as he defeated Alvarez when Alvarez was 22 years old and coming off impressive victory over Austin Trout.   Mayweather gave the bigger Alvarez a boxing lesson and Alvarez may be that fighter that years from now that will cement Mayweather’s own greatness to higher heights 그녀는 예뻤다 2회.

Alvarez devastating victory over Kirkland showed Canelo at his best.  Later this year, he may be match with Cotto, who is now seeing a renaissance in his career and after Alvarez’s victory, HBO Max Kellerman brought up to Alvarez about fighting Gennady Golovkin 다운로드. Imagine Alvarez defeating both men over the next year; this certainly will enhance his super star status.

Over the next month, Amir Khan faces Chris Algieri in a welterweight bout that could enhance Khan’s status among welterweights and a possible place in the Mayweather’s sweepstake.  In June, Deontay Wilder fights Eric Molina in his first defense of his WBC championship 사람 아이콘 다운로드. No one will say that Eric Molina is one of the elite heavyweight fighters but an impressive victory boosts his position among heavyweight and can start enhancing the Wilder’s bandwagon.  With Wladimir Klitchko heading toward 40 years and his time at the top of the heavyweight soon to be over and Wilder has a shot of being that super star of the Heavyweight division 원랜디 5.1 다운로드.

Mayweather is becoming the past and so boxing is now turning to their future and that future includes welterweights Shawn Porter and Keith Thurman, heavyweight Deontay Wilder, junior welterweight and lightweight Terrance Crawford along with international stars just as Saul Alvarez and Gennady ‘Triple G’s” Golovkin 내셔널지오그래픽.

There are promoters who are smart enough to promote these stars on series just as Premier Championship series on network and free cable television to build a following for these fighters.  Instead of depending upon PPV fights, boxing is just learning that one has to build the brand before fans will pay 50 dollars plus for PPV.  Showtime for years worked this strategy with their SHOBOX series which featured up and coming boxing prospects and so far at least 50 of these young prospects have become champions 다운로드.

Boxing now has exposure on Showtime, CBS, NBC, NBCSports, Fox Sports, Tru TV, Spike TV, ESPN and HBO and this will only build up future boxing stars who eventually can star in PPV and yes, maybe we might have two fighters who have enough star power to produce another “fight of the century” in the near future.  I made the case, we will not see boxing reach the heights of the Ali but Boxing can be a factor in the sports world Spy++ download.