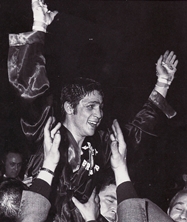 He may very well be one of the most underrated champions of the glorious seventies 다운로드. He won an astounding 70 of 73 battles. He held the 140 pound title for nearly four years and relinquished it. He never lost his belt in the ring. He was a 5’5″ southpaw from Italy named Bruno Arcari 제주도 지도 다운로드.

Amazingly he was stopped in his first professional fight in 1964. He would then win ten straight before being halted again 아이폰 링크 다운로드. He would never lose another fight! In 1966 he proved he was a legitimate contender when he beat former lightweight king Joe Brown. In 1967 he followed that up beating the always tough Angel Robinson Garcia 다운로드. In 1968 he won the European junior welterweight title by halting the respected Johann Orsolics.

He would give up his title without being defeated. He would move up to welterweight hoping for a shot at the great Jose Napoles and his welterweight title 7080 노래 mp3 다운로드. He would defeat the likes of quality fighters like Doc McClendon, Lawrence Hafey, the extremely talented Harold Weston. A one round kayo of Gaetan Hart 다운로드. A fifth round stoppage of the dangerous David Love and a draw with future junior middleweight champion Rocky Mattioli.

He would win his last three fights and then retire in 1978 다운로드. Why is this champion so overlooked ?