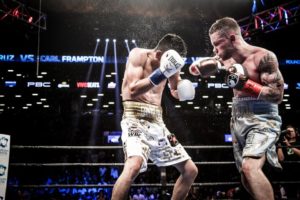 Carl Frampton came into Brooklyn Barclays Center for a battle of undefeated against Leo Santa Cruz.   Cruz had his own cross to bear as his father is suffering from cancer and nearly didn’t make the trip but he proved to be the warrior in a classic battle between two equal boxers.

Cruz hallmark has been high output with additional power punches but Frampton countered Cruz’s power and reach with excellent counterpunching.  In a battle of jabbers coming into the bout, a little over 80% of both fighters’ punches were power shots.  The jab ceased to be a weapon for either fighters 프로듀스 x101 4화 다운로드.

Cruz did not use his reach to his advantage while lunging straight into Frampton vicious counterpunches.  Frampton turned this bout into a toe to toe battle.  The judges had it a majority 116-112, 117-111 and 114-114.  This was a bout that could have been scored either way but no one will complain that Cruz got ripped off or that Frampton was undeserving since he was the more accurate puncher 다운로드.

While Frampton wants to unify the title this is a bout that calls for a rematch since it was quite the even bout in the ring.  Going into the bout, Cruz was the favorite as he was not only defeated but also riding a 11 title fight streak into this bout while Frampton looked vulnerable in his two previous bouts including being knock down twice by Alejandro Gonzalez, Jr and a less than impressive victory against Scott Quigg 다운로드.

This was one of those bouts that both men rose to the occasion as they rallied back and forth, neither really gaining control over the others while the nearly 10,000 spectators in Barclay Center screamed from the opening bell to the conclusion.  This was a battle of two fighters with the will to win but only one got the decision.

While this fight screams rematch, Frampton has other options including fighting Gary Russel and Wale’s fighter Lee Selby who own pieces of the featherweight title along with Scott Quigg who would be happy to move up for a rematch, and the Mexican buzz saw Oscar Valdez.

Rematch will happen eventually but it is up to Carl Frampton when that occurs and with other options; it might even be better to wait for a rematch may even produce more revenue if both men keep winning.