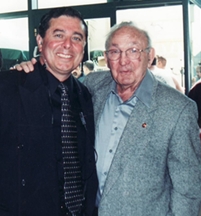 This week the boxing world lost a great champion 멸치 앱. Carmen Basilio passed away on November 7, 2012. He was 85 years old.

Basilio, who was known as the Upstate Onion Farmer because his Italian immigrant father worked in the onion fields near Syracuse, wanted to be a fighter since his younger days 다운로드.

The welterweight and middleweight champion of the 1950’s, Basilio is most remembered for his two brutal bouts with Sugar Ray Robinson, winning the middlewight title and then losing it back to Robinson 다운로드.

He won the title from Robinson on September 23, 1957 before 38,000 fans at Yankee Stadium, winning by split decision over a man considered to be the greatest boxer ever in the history of boxing. This was a great feat for Basilio in a 15 round fight, considering the fact that going into their fight Robinson had only five losses in 147 fights. Basilio would lose the rematch on March 25, 1958 in Chicago by split decison. Both fights were epic.

His official career ring record stands at 56 wins (27 by knockout), 16 losses and 7 draws. He was an inductee into the World Boxing hall of Fame in 1982 and the International Boxing Hall of Fame in 1990. A historical note of interest, Basilio’s nephew Billy Backus upset Jose Napoles to win the welterweight title in 1970.

Basilio was a fine human being and a kind man to everyone around him. He is survived by his wife Josie, four children and many grand and great grandchildren.

May his soul rest in peace in heaven with God.