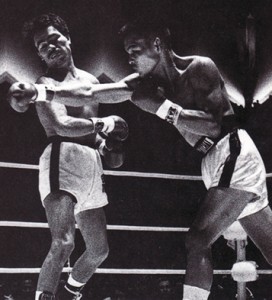 He was a three time holder of the flyweight title.  He was a major player in the flyweight division for a almost fifteen years.  His record reads like a who’s who of the best flyweights of that era.  He was Thailand’s Chartchai Chionoi 동요 mp3 다운로드.

In 82 battles he emerged with a 61-18-3 record.  He stopped 36 foes while being stopped himself on five occasions. Records can be rather deceiving …he turned pro in 1959.  By 1961 he lost a ten rounder to the talented Mitsunori Seki 다운로드.  In 1962 Chionoi would drop a decision to future champion Hiroyuki Ebihara.  By this time Chionoi proved he going to be a force to be reckoned with in the near future 다운로드.

In 1966, Chionoi would upset flyweight champion Salvatore Burruni in a non title fight. Burruni would then lose his title to Walter McGowan.  Chartchai won the WBC flyweight title for the first time halting McGowan in nine rounds.  Chionoi would defend his title three times before losing it in 1969 to Efren Torres.  Chartchai would defeat Torres in 1970 to reclaim the title.  At the end of 1970 Chionoi was crushed in two rounds to Erbito Salavarria 다운로드.

Chionoi would rebound and in 1973 he met the vastly talented Masao Ohba for the WBA version of the crown.  Chartchai started well but was eventually overcome by Ohba.   A few months after this fight, Ohba died in a tragic auto accident.  Chionoi was matched with Fritz Chervet for the vacant crown.  Chartchai halted Chervet in five to claim his third world crown. He defended it successfully twice before being stopped by Susumu Hanagata. Chionoi would retire for good in 1975.

During his career he also crossed gloves with the likes of Bernardo Caraballo, Raton Mojica, Berkrerk Chartvanchai and Bernabe Villacampo …no patsies there.
As I write this article I am left to wonder why another three time flyweight champion from Thailand has been overlooked.  His name was Pone Kingpetch.  I’ll make a case for him later …

One thought on “Chartchai Chionoi … should be in the Hall of Fame?”