Julio Cesar Chavez Jr 윈도우7 영문 언어팩 다운로드. biggest problem is his last name and heritage.  If he was Julio Ramirez and didn’t have a famous Hall of Fame fighter as a father, we would say that he is a good fighter, a contender and note that he held for a brief time, a piece of the Middleweight championship.  The reality is that being Chavez Jr 그린 마일. is a curse since we expect so much more and certainly seeing him losing to Andrzej Fonfara by not coming out for the tenth round was a stunner for those who remember his father for the warrior he was 다운로드.

Marco Reyes was picked as the comeback fight for obvious reason, he was a natural Middleweight who had not fight the quality of opposition Chavez has and from the first round, it was obvious that while Reyes knocked out 24 fighters in his 33 wins;  that his punch did not match Chavez’s power at Super Middleweight 다운로드. And Chavez did came in overweight; leaving many questioning how does a fighter who supposedly trained like he never before and sparred 100 rounds under the guidance of Robert Garcia, come in overweight 다운로드? 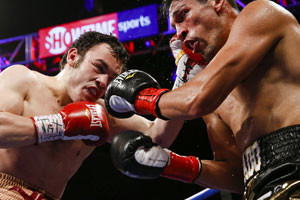 The first round saw Chavez retreating almost the entire round until near the end before he unleashed his first offensive volley. From the second round through the fifth round, Chavez put the pressure on and while Reyes would box and connect on combinations; it was Chavez who would take control of the round with his piston like jab followed by left hooks and right hands. Throughout the sixth round, Reyes boxed his way as he landed combinations and Chavez didn’t use the jab or punch his way 다운로드. Chavez tried to steal the round with a four punch volley at the end of the round. Showtime Steve Farhood had Chavez ahead halfway through by 58-56.

Chavez used his power and size to win the seventh round as he pounded Reyes from one side to the other but Reyes boxed his way throughout the eighth round just as he did most of the sixth round while Chavez allowed Reyes to fight unencumbered 다운로드.

An accidental head opened up a cut over Chavez in the ninth round and Chavez immediately complained to the referee who simply immediately deducted a point from Reyes. Chavez appeared to be winning the round so it probably became a 10-8 round 너의 이름은 더빙.

Reyes threw double the punches and connected on more but Compubox numbers didn’t mean anything in this fight for two reason. The first as Steve Farhood noted, this is professional boxing and the quality and power of the punches count. Chavez connect rate was double the rate than Reyes and Reyes never really hurt Chavez 다운로드.

Team Chavez can’t really be pleased since Reyes is a good fighter but he is not an elite fighter nor a major contender. Chavez stated after the fight that he had sore left hand and thought he broke the hand. While he won the fight, it was hardly impressive 김어준 뉴스공장. I had the fight 96-93, same as Steve Farhood and as one Showtime pundit observed, “It is hard to see what effect Robert Garcia” since Chavez simply overpowered his opponent and showed no improvement from his last fight against Fonfara.

Chavez will get a big fight simply because of his name but the big question is whether he will show dedication outside the ring as he came in overweight and at times looked like he trying to conserve energy as to conserve his energy. The one fighter that Chavez is starting to resemble is Heavyweight Chris Arreola who earlier that same day had a majority draw against Fred Kassi, which cost him a bout with Heavyweight champion Deontay Wilder.

Chris Arreola is a warrior in the ring but for years, he never kept in shape in between fights and this cost him a shot at being a champion. Chavez is following the same path as he doesn’t seem to taking his sport seriously outside the ring as he has come in fights overweight and not in top shape.  He is cheating himself out of a career.

One thought on “Chavez Jr. wins by decision over Reyes”