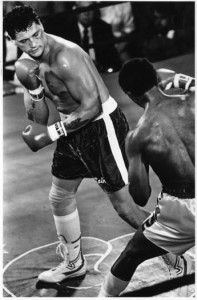 As my last article was about to be posted, I received some additional sad news 웨이백 다운로드. Another friend from Chicago boxing circles, former Cruiserweight Contender, Craig “Gator” Bodzianowski passed away in his sleep, Sunday July 28 다운로드. He was 52 years old. Incredibly, Craig gained his greatest success as a boxer, becoming world ranked and then fighting for a world championship title, after losing part of his right leg in a 1984 motorcycle accident and while fighting with the use of a prosthetic 도서 pdf 다운로드. He turned pro in 1982, after winning a Chicago Golden Gloves title and ran off 13 straight wins, 11 by way of KO. Then disaster struck.  While riding his motorcycle he was involved in a collision with an automobile, resulting in the amputation of his right foot and a portion of his leg 다운로드. After a year and a half layoff he returned to the ring and went on to make history. In 1986 he stopped current boxing promoter Bobby Hitz, in the 3rd round, to capture the Illinois State Heavyweight Championship Download the full hymn. In 1987 and 1988 he fought former WBC World Cruiserweight Champion, and fellow Chicagoan, Alfonso Ratliff with the Illinois State Cruiserweight Title on the line 다운로드. Both times he dropped, razor thin, majority decisions. How close were these two fights? According to boxrec.com, The Illinois Boxing Commission appointed the same three judges to work both fights. All three judges scored both bouts identically 콜린스 사전 다운로드. After watching these two guys go 20 rounds with each other, one of the judges still had it even!
Not deterred by the two losses, Craig went on to capture the WBA Continental Americas Cruiserweight Title in 1989 and in that same year dropped a 10 round decision to future IBF World Cruiserweight Champion James Warring.  In 1990 he dropped a decision to Robert Daniels in a 12 round battle for the WBA Cruiserweight Championship Of The World 다운로드. He hung up the gloves in 1993 with a career record of 31-4-1 with 23 wins by KO. His only four losses were to world champions (Ratliff-twice, Daniels and Warring) And in all four of those losses he went the distance, losing on points. If the loss of his right leg couldn’t stop Craig Bodzianowski, what chance did a mere world champion have?
Called “Gator” because of the “Lacoste Aligator” tattooed on the left side of his chest… Craig Bodzianowski was certainly one of the toughest men, not only physically but mentally, to ever step into a boxing ring. As an amputee, his remarkable conviction and attitude allowed him to overcome tremendous adversity and to make history beyond the world of boxing. He was an inspiration in the truest sense of the word and will be greatly missed.