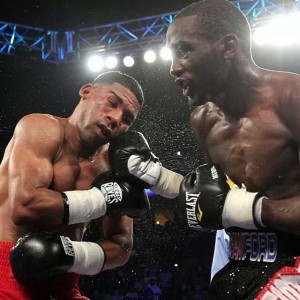 On June 28, 2014 – HBO had a double header from Omaha with the first fight featuring Matt Korobov fighting Jose Uzcategui in a battle of undefeated Middleweights prospect looking for a possible title shot.  In the first round, the first big punch came from Korobov straight left against Uzcategui.   Korobov continued to follow through on his success with solid power punches but in the third round, Korobov started to slow down and looked fatigue even though he did land solid combinations throughout the third round 한국가요 무료 다운로드.

Throughout the fourth round, Uzcategui landed more punches and started to put pressure on Korobov but in the middle of the fifth round, Uzcategui made a tactical mistake as he kept his hands low after a break and Korobov landed a big left followed by a right hand hook that shook Uzcategui.  An accidental head butt open a cut over Korobov left eye and Uzcategui did manage land two big rights as the bell ranged 심즈 4 다운로드.

Throughout the eighth and ninth round, Uzcategui managed to land some good rights and stay in the bout while Korobov countered with big body shots.   Throughout the tenth round neither fighter could garner the upper hand but Korobov experience allowed him to escape any major damage as he went on to win the unanimous decision 영화 인터뷰 다운로드.

Terrace Crawford defended his lightweight division title against Yurikois Gamboa who came in this fight as an underdog despite being undefeated.  Gamboa was considered one of the best pound for pound but management problems and some less than inspiring recent bouts had pundits viewing this as a must win bout 삼성 사이드 싱크 다운로드.

The first round saw Gamboa hand speed dominate the first two minutes of the round before Crawford adjusted to the speed over the last thirty seconds.   Gamboa speed continued to bother Crawford throughout the second and third round, forcing Crawford to go southpaw.  Near the end of the fourth round, Crawford finally nailed Gamboa with three straight lefts that pushed Gamboa backwards for brief moments 유령신부 다운로드.

With a minute left in the fifth round, a Crawford right hand hook followed by a straight sent Gamboa down for an eight count and Gamboa barely survived the round as he took three more big right hands.  Crawford continued to walk down Gamboa throughout the sixth round even though Gamboa showed heart to withstand Crawford blows.  Going into the second half, Crawford took control of the bout and throughout the seventh round, Crawford continued to nail Gamboa with big shots as Gamboa punches were wild whereas in the beginning of the bout, they were accurate and sharp 더존 스마트a 다운로드.

Near the end of the eighth round, Gamboa attacked and started to connect before he ran into a right hook that sent him down.  Crawford finish the round with big body shots that hurt Gamboa.  Crawford ability to switch from orthodox to southpaw allowed him to use his right hand to land accurate his power shots 영화 거인 다운로드.

Gamboa landed a big right hand in middle of the ninth round that hurt Crawford and Gamboa continued to attack.  With thirty seconds left, Gamboa attack was countered by yet another Crawford right sent Gamboa down.  Gamboa got back up but his leg was rubbery and while Gamboa continued to advance, he simply put himself in position for another Crawford shot which came in the form of an upper cut 음력 달력 다운로드. As Gamboa hit the canvas for the fourth time, the referee stopped the fight.