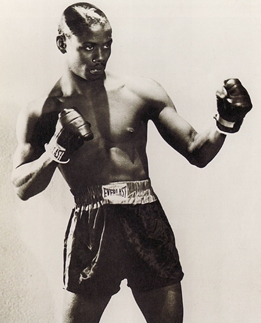 He was born Eligio Sardinias Montalbo on January 6, 1910 in Cerro, Havana, Cuba 다운로드. He launched his professional boxing career in 1927 and would participate in over 150 bouts in a career that ended in 1938.

He was nicknamed the ” Cuban Bon Bon ” and during the 1930’s he was one of the best drawing cards in New York gp pro download. His flashy personality and even flashier style in the ring made him a real crowd pleaser.

After racking up a series of victories in his native Cuba, ” The Kid ” invaded the US in 1928 knocking out Eddie Enos in three rounds in Mineola, N.Y 다운로드. He would go on to fight at all the popular New York spots like Ridgewood Grove and the St. Nicolas Arena.

On November 30, 1928 at Madison Square Garden the Kid drew with rugged Joey Scalfaro 다운로드. In 1929 he beat Bushy Graham and Vic Burrone. Then on May 22, 1929 the Kid outscored the great Fidel LaBarba. Kid Chocolate continued to win fights and among his victims were Gregorio Vidal, Al Singer and Dominick Petrone 다운로드.

The year 1930 saw the Kid enter the ring for a match with Jackie ” Kid ” Berg. The energetic and quick Chocolate was hard pressed to last against his aggressive adversary 올레 뮤직 다운로드. Berg won a split decision. Three fights later, the Kid was outhussled by Fidel LaBarbra. So what happens ? Kid Chocolate is matched with Batttling Battalino for the featherweight title 인터넷 익스플로러 6 다운로드. On December 12, 1930 at Madison Square Garden, Battalino got the verdict in a bout that many felt could have gone to Kid Chocolate.

Finally on July 15, 1931 the Kid finally won a world title 다운로드. At Baker Field in Philadelphia the Kid halted the rugged Benny Bass in seven rounds to win recognition as the worlds junior lightweight champion. In November he moved up in weight to take on the lightweight champion Tony Canzoneri office professional plus 2016. It was a great fight witnessed by over 19,000 fans at Madison Square Garden. This time the Kid came up on the short end of a split decision.

Chocolate would win nine straight after his setback to Canzoneri against some tough guys like Davey Abed, Lew Feldman and Johhny Farr 다운로드. On July 18, 1932 Kid Chocolate would meet Kid Berg in a return match.
Again Berg was able to pull off a close decision at the Garden.

The Kid again put together an impressive win streak including a fifteen round win over Fidel LaBarba that gained him the New York State Athletic Commission featherweight title.

On November 24, 1933 Kid Chocolate suffered a severe career setback when he was blasted out in the second round by Tony Canzoneri. One month later the Kid lost his junior lightweight title to Frankie Klick.

His career was on the decline but he was still winning more then he lost. There was a draw with tough Tommy Paul in 1934. Later that year he was clearly outpointed by Petey Hayes. In 1935 he lost a decision in Caracas, Venezuela to Simon Chavez.

In December of 1936 the Kid would drop a points call to Phil Baker. He would then win over twenty fights through 1938. He was held to a draw by Bernie Friedkin and Orville Drouillard but managed a degree of vengence when he was awarded a well deserved decision over Phil Baker in Cuba in 1938.

After 1938 the ever popular Kid Chocolate retired. He had met some of the best of his day. He was ” Mantequilla ” which means ” Smooth as butter ” long before the great Jose Napoles was given that nickname.

In comparing Kid Chocolate’s style to more contemporary boxers, I would say the smooth boxing Ismael Laguna and the extremely clever Wilfred Benitez fit the bill.

Kid Chocolate was grace personified. He was surely in a class by himself.