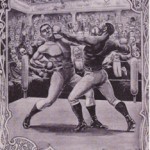 David was recently interviewed by David Tyler, boxing writer for www.doghouseboxing.com. We’ve been given permission to display that interview here. Enjoy!

David Tyler:  David, what qualifies someone as a boxing historian?
David Martinez:  Somebody that religiously, daily, every minute of their life, is passionately devoted to the sport of boxing.

DT:  How many years have you accumulated using your criteria as a historian?
DM:  I have about 52 years.  It’s in my life, my DNA, that’s all I do.  My house is like a boxing museum.

DT:  I noticed that on your website is a posting of your top 12 boxers 다운로드.  In alphabetical order:  Muhammad Ali, Henry Armstrong, Roberto Duran, Joe Gans, Harry Greb, Eder Jofre, Jack Johnson, Benny Leonard, Joe Louis, Carlos Monzon, Willie Pep, and Sugar Ray Robinson.  How did you decide these were the top 12?
DM:  That’s my personal opinion over 52 years. All of these fighters would be ‘all time’ greats.  My decisions were easy….let me give you an example from my top Heavyweights also on the website…. people question why I rate Jack Dempsey over Gene Tunney and bring up the fact that Tunney beat Dempsey twice.  I simply say this, ‘at the pinnacle of both of their careers, I believe that Dempsey was a better fighter than Tunney.’

DT:  James Corbett lost twice to James Jeffries radiant 무료 프로그램.  Why do you rate Corbett higher than Jeffries?
DM:  Same logic…I think that at the pinnacle of his career, Corbett was a better fighter than Jeffries.  Here’s another example, I think that Joe Frazier was a better fighter than George Foreman at the pinnacle of his career even though Foreman beat him twice.

DT:  Your pick as the greatest of all time?
DM:  Sugar Ray Robinson….yesterday we had talked about Henry Armstrong and the tough fights he had with Fritzie Zivic…..I had the pleasure of interviewing Sugar Ray Robinson’s wife, Millie, and she told me that Sugar Ray told her that the toughest man he ever fought was Fritzie Zivic, not Jake LaMotta as most would assume.

DT:  David, where did we reach the pinnacle of boxing?
DM:  There have been many pinnacles….boxing is a classic sport of swings…..you have your highs and your lows 동방 비상천칙 다운로드.  As I look at the 80’s you have Robert Duran, Marvin Haggler, Thomas Hearns, Pipino Cuevas, that was an era where boxing peaked.  Then it took swing to the opposite.  The Heavyweight division was not in good shape when Marciano retired.  You had someone like Floyd Patterson as champ and he was a good Heavyweight but not a great one.  Then came Ali and other great Heavyweights.  So there you have an example of what I call the pendulum swing.  The true boxing fanatics have been with the sport through the highs and lows and that’s also just the human nature of life.

DT:  If forced to pick the highest pinnacle point in boxing, what would it be?
DM:  I would have to say boxing reached the highest level on March 8, 1971….Joe Frazier vs 로미오와 줄리엣 1968. Muhammad Ali.  I consider that the highest point in my era of boxing…the fight of the century.  Two undefeated Heavyweight Champions meeting in such a stunning event.  This not only peaked boxing but it was a spectacle event on a global basis.

DT:  I consider the fight the greatest event in the history of sports.  The one sporting event that actually lived up to the hype!
DM:  I totally agree. I remember all the particulars of the fight, what a great night for boxing.  You told me that your dad took you and your brother.  I went with my late father and friends and we had first row seats in the balcony at the Grenada Theater 다운로드.  I remember the tickets cost $15.00 which was a lot of money for a closed circuit fight.  That fight was not a Saturday night special….it was on a Monday night.

DT:  What happened to boxing….why do we only have a few good fighters active today?
DM:  Let’s start with this….the fight that everyone wants to see is Mayweather vs. Pacquiao….both quality fighters.  However, there are other fights out there….Sergio Martinez vs. Mayweather at Middleweight.  Alvarez vs. Chavez Jr. at Middleweight not at 154 pounds.  Also, how about Ward vs. Bute?  That would sell big in Canada…the equivalent of a NHL Stanley Cup playoff game itunes 11.1.

DT:  Would any on your active list be potential candidates for your all time top 12 list?
DM:  Mayweather of course could compete in any era of boxing.  Boxing is all about styles and he would be tough in any era.  Pacquiao would probably be competitive but I don’t think either fighter would beat Roberto Duran or Carlos Monzon.

DT:  David everyone affiliated with this sport wants to see the two biggest stars – Mayweather & Pacquiao – square off in the ring 다운로드.  How do you see that fight?
DM:  In my mind…I would pick the bigger, more skilled fighter..Mayweather.  He is a lot better than people think.  I know all of the circus activities that surround him….court business, not speaking to his father….throw all of that out the window when he enters the ring.  If forced to pick that fight, I would go with Mayweather by decision.

DT:  Do you think the fight will happen soon?
DM:  I do not.  I’m saying that in a bias way because I want it to happen.  My guess would be late November of this year.

DT:  When you look at your library of fights can you pick a couple of your favorites 명탐정 피카츄 smi?
DM:  There is two fights that stand out – Diego Corrales vs. Jose Luis Castillo – that’s the best fight I have seen in the past 25 years.  Next I would go to April 15, 1985 – Haggler vs. Hearns – three rounds, middleweight, it lived up to its expectations.  Those are the two most requested from my library.  There are others that I could mention but asked to pick two – those would be tough to beat for pure boxing entertainment.

DT:  When we look at the future of boxing, will we ever get back to 1971 or are we way beyond that kind of boxing?
DM:  I think that somewhere along the line society has changed.  By that I mean people want everything quick and fast.  People don’t want to go to a restaurant and wait for a home cooked meal….they go to a fast food place 다운로드.  That’s why MMA has become so popular with fans.  I really don’t like MMA but I can understand why the sports has its fans…it’s a quick down and dirty sport.  I prefer the ‘sweet science’ of boxing.

DT:  What’s happens when Pacquiao and Mayweather retire?  Who will replace them?
DM:  I am not a fortune teller and that’s a great question.  Someone will emerge from the pack.  When the Hagler, Duran, Mancini, Arguello, Leonard, Hearns, all left the sport….who’s next was the question.  DeLaHoya, Mosley, Mayweather, Pacquiao all came along.  I really believe that some of the younger fighters will step up and carry the sport 엠넷 동영상 다운로드.

DT:  So you believe that the sport will survive this ‘low’ point in its illustrious history?
DM:  Here’s another way of looking at the situation…just remember when Ali and Fraizer carried the banner for Pay Per View (PPV) boxing television audience, then came Sugar Ray Leonard and Thomas Hearns,
next came Mike Tyson and Oscar De La Hoya…now we have Manny Pacquiao and Floyd Mayweather Jr.  They are both on the other side of 30…maybe the next to carry the banner is Tim Bradley and Saul Alvarez…the point being is that you can see the trend since PPV came into our living rooms.  This will surely continue as long as fight fans are willing to pay the money.

DT:  David, it’s been a lot of fun discussing the history of boxing and your evaluation of the current boxing status.  Can we do this again soon?
DM:  My pleasure and you can find more historical trivia and list on my website…..www.dmboxing.com

Readers:  I encourage you to visit David’s website…a treat for all boxing fans.  Thanks for visiting doghouse boxing!