Nonito Donaire faced Toshiaki Nishoka in a battle of the two best Super bantamweights and Brandon Rios decided to test the very talented junior welterweight division by fighting against one of the best sluggers in the division, Mike Alvarado cinema 4d 다운로드. Alvarado began boxing by shooting his jab in an effort to box but after a minute of half of this, a Brandon Rios left hook got through Alvarado to begin the brawl. Both fighters started to slugging each other as both nailed each other with short crisp punches. Rio kept his head lower as it gave him more leverage 다운로드. Both fighters threw nearly 200 punches combined but Rios landed a few more bombs.

In the early part of the second round, Rio maneuver to unleash left hooks but at the minute and half, Alvarado nailed Rios with a right and followed up with an uppercut that sent Rio head up. Rio landed some vicious left hooks over the last thirty second whereas Alvarado came back with right hands including another uppercut.

Third round saw the fight simply settled into trench warfare as both fighters’ simple exchanged blows but Alvarado used jabs to set up combinations whereas Rios simply threw one power shots after another but by the end of the fourth round, Alvarado started to garner a little momentum as he slightly outworked Rios 다운로드. The fifth round saw both fighters exchanged blows over the last minute as both fighters connected with left hooks after left hooks while never giving ground. With the fight at the halfway mark, both fighters looked exhausted but yet it was contest of will as neither fighter buckled under the onslaught of power shots after power shots 다운로드. The question that could be asked, could both fighters maintain the fast pace. Toward the end of the sixth round, a Rios right looked like it finally hurt Alvarado as Alvarado counter with two solid rights of his own before retreating from the Rios attacks. Alvarado finally looked tired.

The seventh round saw Rio explode as he landed a right hand that stunned Alvarado after the first minute of the round. Rio followed up with two lunging rights and a left hook that forced Alvarado to the rope. Rio followed with another right hand, a left hook and ended the volley with a right as referee stopped the fight. Alvarado looked at the referee but he voiced no opinion on the stoppage as it was evident that Referee made the right decision.

Alvarado averaged 111 punches a round and the early rounds was the more accurate puncher. Throughout the sixth and seventh rounds, Rios found a home not just for his left hook but overhand rights, The early round saw Alvarado with the advantage but after the sixth round, it was Rio who took control and won the fight as he wore Alvarado down. 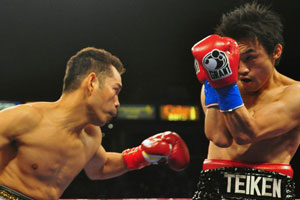 The main event saw one of boxing best pound for pound fighter, Nonito Donaire up against Toshiaki Nishoka, who had not tasted defeat for eight years. Nishoka came out in his south paw stance but he did little over the first minute as he kept his hands up high to defend against Donaire left hook. The first round was a feeling out round as boo cascaded due to lack of action. For first nine minutes, Nishoka played defense as he took no risk and forcing Donaire to start the action. In the fourth round, HBO announcer and former boxing great Roy Jones noted that Donaire needed to be patient and take what he can get before “shop opens up.” In the fifth round, Donaire showed a little more arsenal as he started to get his left jab to go with his right hand as Nishoka safety first fighting style were making fans impatient.

The shop opened up as Nishoka started to open up and this gave Donaire more opportunity. This led to a Donaire left uppercut that sent Nishoka down for an eight count. After the knockdown, Niishoka got aggressive as he managed to land a few straight left but he was caught by a few hard Donaire‘s punches.

Throughout the seventh and eighth round, Nishoka continued to take a few more risk but Donaire held all the cards as he nailed Nishoka with the more meaningful punch. In the ninth round, Nishoka looked to time Donaire but as Nishoka jabbed with his right, Donaire countered with straight right that sent him down. Donaire landed an uppercut but the fight was stopped as Nishoka’s corner stopped the fight. For five rounds, this was a boring fight but after Nishoka opened up, Donaire unleashed all of his talent. Donaire was the better fighter and showed why he was one of the best pound for pound. Nishoka threw an average of 22 punches per round and spent the first five rounds in survival mode. Donaire showed patience and then ended the fight like a Hall of Fame fighter should.