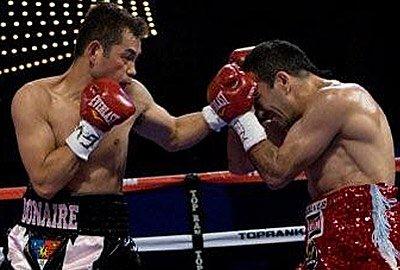 Nonito Donarie is on the verge of superstardom and in the original capital of boxing, New York City; he faced the undefeated Argentina fighter Omar Andres Narvaez.  Donarie have beaten some of the better fighters in the lower weight division including Fernando Montiel and the power punching Vic Darchinyan.  Donarie wanted to make his point that Pacquaio wasn’t the only great Philippine fighter 다운로드.

The opening minutes was a feeling out process as Narvaez boxed and looked for weakness against the hard punching Donarie.  Near the end of the round, both fighters nailed each other with solid hooks but Donarie punches were heavier.   The second round saw two technical fighters playing a chess match as both fighters look for advantage but action proved sparse as neither fighter could gain an advantage ms access 2010 한글판. Narvaez defense forced Donarie to move forward and threw punches, but punches missing their target.

Narvaez showed some defensive wizardry and countered effective at times as he would nick Donarie while forcing Donarie to stalk 다운로드. Donarie never felt comfortable in attacking Narvaez.  In the fourth round, Donarie threw punches but all were blocked but Narvaez failed to throw punches of his own and with thirty seconds left, Donarie landed a right hand that shook Narvaez and forced the Argentine fighter to retreat 다운로드.

Throughout the fifth round, Donarie threw punches after punches while Narvaez simply played possum, blocking most of the punches but he did very little to counter the bigger Donarie.   Narvaez defense frustrated Donarie, who was forced to fight a more patient fight and he was unable to get Narvaez into a firefight anaconda3 다운로드.

Going into the second half of the fight, Donarie was winning on points but he hardly looked impressive, just workmanlike.  During the seventh round, HBO Bob Papa compared the fight to a hockey game with Narvaez playing goalie making saves after saves while Donarie keeps shooting pucks; hopefully that one of those pucks get through. The comment reminded me of the Rodney Dangerfield joke, “I went to a prize fight and a hockey game broke out.”

In the eighth round, Narvaez finally opened up for a brief moment with a minute left as he threw combinations that forced Donarie to retreat for the first time  in the fight before the bout settled into the pattern of the previous rounds, Donarie chasing and Narvaez playing defense with a turtle defense, using his arms and gloves as a shell to protect himself from punches.

Donarie finally struck with a solid right that scored near the end of the eleventh round.  Going into the final round, New York boxing fans started to yell, “This is Bull Sh*t, This is Bull Sh*t!” and Donarie failed to excite the fans but then Narvarez frustrated the Phillipine fighter by not fighting as Narvarez seemed content to say he could finish a fight against  a bigger fighter.  Hardly a great fight and Donarie could not force his opponent to fight and he had to be satisfied with winning an easy decision.