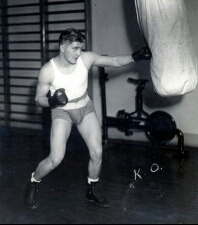 The memory of a fighter that has disappeared in the boxing minds of today is that of George Chaney wow 클래식.

A fine record of eighty-six knockouts in a sixteen year career was an outstanding feat in itself, giving him the nickname “KO”.

Chaney was born in 1893, in Baltimore, Maryland of Irish decent 다운로드. In his career he weighted 118 to 135 pounds and fought in the bantamweight, featherweight, and lightweight divisions. He stood 5 feet, one-and-half    inches, his professional career started in 1910 and ended 1925 다운로드.

His southpaw style was as good as any boxer, which included hard hitting from either hand.

I find it not ironic that in one of my favorite boxing movies, “Hard Times” starring Charles Bronson, the name chosen for Bronson’s character was Chaney.

George “KO” Chaney died at the age of 66 on December 20, 1958 in his hometown of Baltimore. His official ring record in 177 bouts was 109 wins, 17 losses, and 55 no-decisions, with 86 by knockout. His ring record varies on other boxing sources as some of his no-decisions have been recorded as wins-losses-draws.

Inducted into the International Boxing Hall of Fame in 2014, Chaney is the third boxer from Baltimore to be honored after Joe Gans and Kid Williams.

Another item note worthy is that he was selected #96 in Ring Magazine’s list of 100 greatest punchers of all time.