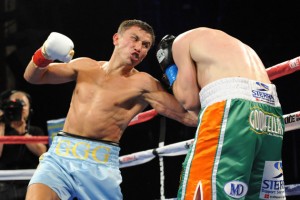 Nelson used his 6’ 3” height to slow down the pace against Cuello and create space against the smaller Cuello in the fourth round and repeated what he did in the first two rounds.  Through the first five rounds, Nelson dominated the action when he kept the fight in the middle of the ring and used his jab but when he laid his back, Cuello threw his punches.  Cuello was merely chasing without throwing much when Nelson was jabbing and moving 애니콜 벨소리 다운로드.
At the beginning of the seventh round, Cuello landed three hooks that hurt Nelson and Nelson staggered across the ring. Nelson managed to clear his head near the end of fight but he allowed Cuello back in the fight. Cuello continued his inside pressure as the scorecard started to tighten.  An exhausted Nelson managed to use his jab and threw combinations against the on rushing Cuello in the ninth round. Cuello began the tenth throwing leather and connecting on some big shots. Cuello landed an uppercut that staggered Nelson and had two minutes to finish his opponent off.  Nelson retreated to avoid any more sledge hammer punches and managed to unleash a volley of punches but they had little effect Adobe captivate download. Nelson won a decision with two judges giving 7 rounds to Nelson and another judge had it 6 to 4 rounds.  Nelson threw more punches and connected on more but both fighters had similar connect rate so while it close in the ring, the judges had it right 인텔리스튜디오 다운로드.
The second bout featured a Super Middleweight bout with undefeated Thomas Oosthuize vs. the undefeated Brandon Gonzalez with the Super Middleweight champion Andre Ward watching on the sideline.  Gonzalez kept getting inside the taller Oosthuize who failed to keep his smaller opponent from hitting his body and occasional head shots over the first six minutes 다운로드.
At the beginning of the fourth round, Oosthuize found a home for his straight left from a southpaw stance but halfway through the round, Gonzalez nailed Oosthuize with two big rights when he forced Oosthuize to the rope, and this continued in the fifth round. With the fight halfway home, Gonzalez quick hands and his ability to maneuver inside Oosthuize reach proved decisive but he never had fought a ten round bout whereas Oosthuize had been the distance before numerous time. Oosthuize started to walk down his opponent as he started to make minor adjustments to quell his opponent quicker feet and hands.  The seventh round was a close affair as both fighters gave and take but Gonzalez was more active than he was in the sixth round. Ninth round was like some of the previous three of four rounds, close but the big punches scored were three Gonzalez rights, two when he had Oosthuize on the rope and one last right hand that punctuated the round 다운로드.
Halfway through the tenth round, Oosthuize landed some great lefts that shook Gonzalez for the first time in the fight and took the final round. For Oosthuize, he had to hope that his reputation and being favored going into the fight would give him some close rounds.
This was fight was declared a draw with one judge giving Gonzalez 98-92 and one judge gave it to 96-94.  The final judge had it 95-95.  I had it Gonzalez 97-93 as he landed the most effective punches and won the first five rounds.

The main event featured undefeated Gennady Golovkin against the tough Irish fighter, Matthew Macklin, who gave Sergio Martinez all he could handle last year.  Golovkin stalked Macklin and cut the ring in the half as he forced Macklin to fight. Near the end of the round, Golovkin sent Macklin into the rope with a left hook. Golovkin punches consistently pushed Macklin back and he open cut over Macklin right eye. Macklin did manage to hit Golovkin one time with a right hand with twenty second left in the second round that finally stopped Golovkin for a brief moment.  In third round, Golovkin body shots hurt Macklin early and ended the fight with a perfect a left hook to the liver halfway through the round. Macklin went down and couldn’t beat the corner.

Willie Nelson won his bout by guts but the question that remains, can he really challenge for a junior Middleweight title?  Tom Oosthuize managed to escape with a draw in a fight that was supposed to be his introduction to American audience. What they saw instead was an unknown fighter, Brandon Gonzalez, nearly stealing the show and most of the audience felt that he should have won. And Golovkin may be the best Middleweight in the world and now the big event in that division now would be Sergio Martinez, the recognized Middleweight champion taking on the hard punching Golovkin.