Robert Guerrero returned to the ring after a loss to Floyd Mayweather thirteen months as part of  Showtime triple header.   The first bout was Devon Alexander faced Jesus Soto Karass, a tough brawler.  Alexander is one of those fighters that never have received the credit he deserve for a great career but the memories of his losses is what pundits remember jquery 멀티파일.

Alexander showed his old self as he boxed brilliantly over the first three minutes and landed combinations at will 다운로드. Karass did manage to connect on two right hands but those were the only good punches he threw in the first round. Throughout the second and third round, Alexander simply dominated the action with slick combinations and in the fourth round, Alexander stunned Karass with a quick right hook 다운로드.  Throughout the fifth round, Karass turned southpaw and had some success in a round still dominated by Alexander but Karass connected with solid shots in the opening minutes of the sixth round.  By the end of the sixth round, Karass made the bout competitive as he started to connect on solid shot while Alexander started to stay more stationary.

Going into the last three rounds, Showtime Steve Farhood had it close four rounds to three in favor of Alexander. ( I had it five round to two but there were close rounds from the fifth through the seventh that were close and could have scored it for either fighters.)

Alexander started to box more effectively than he did the previous three rounds in the eighth round and continued to do so throughout through the ninth round.  Alexander even managed to stun Karass with a minute left. Karass gave it all over the first minute of the twelfth round as he threw one punch after another as he forced Alexander to abandon the style that served him well in the previous two rounds.  Alexander forced Karass to the rope and nailed Karass with combination as he stayed in Karass wheelhouse.  The last minute saw both fighters exchange punches in an exciting close final round.   Devon Alexander won the decision one judges had it 97 to 93 while the other two judges gave it 99 to 91.  (I had it 97 to 93 and Steve Farhood had it 96 to 94.)

The strength showed in the fifth round as he ripped body shots after body shots and forced Russell to retreat.  Russell attacked in the sixth round and forced Lomachenko to move backward but Russell threw a lot of punches but he connected on very few.  Throughout the seventh round, Russell was the aggressor but like the sixth round, many of his offensive moves were thwarted and over the last thirty seconds, Lomachenko nailed Russell with vicious body shots.

Near the end of tenth round, Lomachenko punches showed its effect on Russell as the left eye started to swell and as the round concluded Lomachenko nailed Russell with a right hook that shook Russell.  Throughout the eleventh round, Lomachenko power took hold as he landed solid powers that slowed Russell down.  He added upper cuts to his arsenals to go with the hooks that hurt Russell.  Lomachenko dominated the twelfth round with solid shots.  Lomachenko landed more punches despite throwing nearly a third less punches. It was his accuracy and technical skills that won him the fight.

The strategy of how to develop a Olympic star was on display.  Russell came in the fight undefeated after 24 fights but most of those fighters were nowhere on the skill level with Lomachenko.  Lomachenko fought only in his third professional fight but his team decided that after nearly 400 amateur fights; go for the gusto.   While one might not want to go for a title in his second fight as Lomachenko did but it does show that too many star fighters are coddled and this could retard the skills of a young fighter.   The only thing to mar this fight was that one judge had it a draw and left one wondering what fight she was watching. 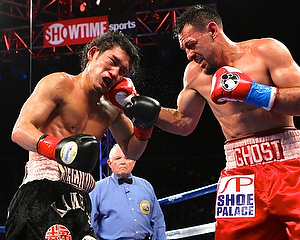 Yoshihiro Kamegai challenged Robert Guerrero in Guerrero’s comeback fight.  Kamegai came in with more knockouts and considered a hard puncher but Guerrero had been a champion who over the years showed he could fight any style needed for victory.  Guerrero started out fast as he nailed Kamegai with solid combinations included body shots to go with combinations to the head.

For some reason, Guerrero stayed on the rope most of the second round as he nailed Kamegai with combinations but he also allowed Kamegai to work hooks to the body. This continued into the third round and while Guerrero got the better of the exchanges; Kamagai was able to land his sledgehammer punches; punches he couldn’t land in the first round when Guerrero was boxing.

Throughout the fifth round, Guerrero showed more variety in his punches as he landed solid combinations including a three straight lefts but Kamegai landed his own solid shots.  After the first five rounds, Guerrero connected on nearly double the punches as he proved to be more accurate. Guerrero started the sixth round by moving and using angles but as the round progressed, Kamegai gained the upper hands as a cut open over the left eye from an uppercut and the eyes started to swell with more than half of the fight left.  Guerrero fight style allowed this to occur as he allowed an tough but an inferior fighter to stay in the fight.

Halfway through the eighth round, Guerrero nailed Kamegai with a left hand that sent Kamegai reeling and Kamegai staggered backward.  Guerrero landed more power shots against a tough brawler and throughout the tenth round, Guerrero landed the more effective shots.  Kamegai made a minor comeback in the eleventh as he trapped Guerrero on the rope most of the round and he found a home for the right hand as Guerrero swollen left eye prevented him from seeing it.

Guerrero started fast in the twelfth round as he landed several combinations over the first minute but by halfway through the round, this turned into a battle of attrition as both fighters simply went toe to toe over the final two minutes. Guerrero landed nearly 150 more power punches than his opponent to win unanimous decision.   The real question is why over the first half of the fight did he chose to fight a style that benefitted his opponent.  Over the second half of the fight, the battle of attrition sapped the Guerrero ability to box so it was trench warfare down the stretch.