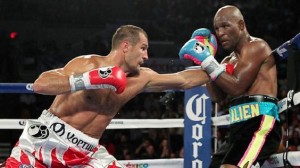 By Tom Donelson / contributed to dmboxing.com since 2008 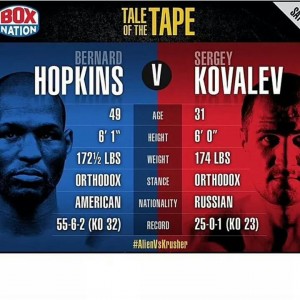 Bernard Hopkins is the old man of boxing, a man who is nearly half a century age, trying one more time to cheat father time.  In Sergio Kovalev, he faced his one of his toughest opponent.  Before the main event, prospect Sadam Ali faced Argentina Carlos Abregu.  Abregu had only lost to Tim Bradley and would provide a test for Ali 다운로드.

Ali moved to avoid Abregu punches but neither fighters could connect on anything solid and through the first nine minutes, fans booed at what they perceive as a no-action fight.  In the fourth round, Abregu threw one punch at a time but connected on nothing while Ali continued to jab but there was little connection to speak of but he appeared to winning simply by not getting hit 다운로드.

In the sixth round, Ali nailed Abregu with a solid right hand with a minute left in the sixth round that sent Abregu down briefly.  Abregu got back up but his leg looked unstable but Ali continued to box and seemed contented to box the rest of the round 다운로드.

Ali in the seventh round pressed the action for the first time of the fight and he nailed Abregu with sharp combinations.  Over the second half of the round Abregu went back to pressing the action but except for a couple of shots that landed, Abregu chased a ghost as his punches seem to land where Ali was a second before.

In the early part of the eighth round, Abregu attacked but he simple ran into Ali combinations and Abregu simply couldn’t connect as he reached for his opponent.  Over the last thirty seconds, Abregu landed his first flush combinations as he finally manage to trap Ali on the rope consistently.

Abregu started fast in the ninth round but Ali snuck a left hook that shook Abregu.  An Ali right hand staggered Abregu and Ali went on the offense.  Ali faked a left hook and nailed Abregu with a right hand that sent Abregu down.   Abregu managed to get up but Ali landed combinations and Abregu simply retreated without fighting back. The referee stopped the fight and Ali upset the veteran Abregu.

Bernard Hopkins place in history is already set but he took on the toughest light heavyweight as he wanted to put an exclamation on a great career.  Kovalev view this fight as his ticket to be recognized as the best light heavyweight. Kovalev came into this fight as a knock out specialist who never went beyond the eight rounds and Hopkins hadn’t stopped a fighter since he stopped Oscar De La Hoya with a  perfectly placed liver shots.

Hopkins control the pace in the first round but Kovalev forced Hopkins to move and Kovalev first right hand sent Hopkins down. Hopkins got up and avoided several haymakers but Kovalev showed discipline when chasing Hopkins.

Kovalev continued to pursue Hopkins and Hopkins simply never got off while his feints failed to fake Kovalev or give him something to think about.  In the third round, Hopkins tripped Kovalev and sent Kovalev while trying to get the referee to give him credit for knockout but that didn’t work.  Kovalev landed two or three 1-2 and Hopkins landed a right hand and a left hook but the third was still Kovalev.

Kovalev continued to push the action and throughout the fifth round, Kovalev pushed the older Hopkins and Hopkins never seem to rest. At the halfway point, Kovalev was way ahead on points with one knock down.  It would have been difficult to give Hopkins any rounds and that knockdown gave Kovalev a seven points lead going into the second half of the battle.

Kovalev nailed Hopkins with a right hand in the eighth that nearly ended the fight but Hopkins did not go down and Hopkins survived with his defensive skills to avoid any more damage.  Kovalev faced the ninth round for the first time and he didn’t seem the worse for wear as he simply pushed Hopkins around the ring and Hopkins managed to land only two solid right hands.

In the tenth round, Hopkins landed a big right and even bigger left hook but Kovalev did not move or retreat.  Kovalev didn’t seem faze by the punches and ended the round with left hook.  The eleventh round saw Kovalev simply punish the old warrior and with one round left, Kovalev did not look tired.

At the start of the twelfth round, Hopkins connected on a left hook that sent Kovalev reeling on wobbly leg.  For the first time, there was drama but Kovalev pounded Hopkins shortly after as he gained his leg back.  Kovalev landed five big rights that forced Hopkins to retreat.   With thirty seconds left, Kovalev tried to knock out and nearly got it but Hopkins was still standing but his title were gone. 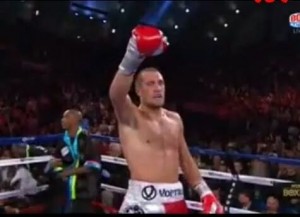 Kovalev won the fight easily and the judges had him winning every round.  Kovalev dominated this fight and Hopkins looked 49.  For Hopkins, this should be the end of a great career as he took Kovalev best shots but you don’t win by taking the other guy’s best but delivering some punches of her own.