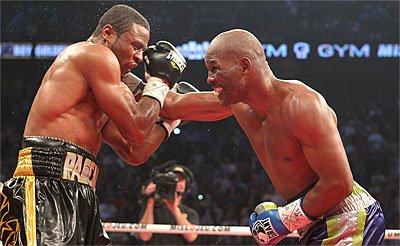 Diaconu first big blow came halfway in the fourth round through with a solid right while Dawson continued to hit with combinations.  The fifth round was Diaconu best as he nailed Dawson with combinations but Dawson punctuated the round with two solid right hand hooks.  Over the next three rounds, Dawson threw combinations in workmanlike fashion as he kept throwing combinations; forcing Diaconu backed up most of the time but Diaconu never seemed hurt.

In the ninth round, Diaconu nearly derailed the Dawson express with a solid right behind the head, followed by another right; forcing Dawson to retreat.  The tenth round was Dawson comeback in which \he fought tall and boxed effectively while throwing combinations that often hit their targets, Diaconu head.

Going into the last round, Dawson had a large lead or should had a large lead on the judges scorecard and look at Diaconu’s face should have told any judge who was winning with both eyes bruised and slightly swollen.  Diaconu needed a knockout and threw wild punches; connecting on a few as Dawson retreated. In the final thirty seconds, Dawson controlled the action as he thwarted the Diaconu’s attempt to pull out of miracle.

“Bad Chad” Dawson won an easy victory on the scorecard and the compubox numbers showed the why as Dawson connected on twice as many shots; including power shots over Diaconu.  The decision reflected what happened in the ring.

The main event began with a raucous crowd rooting for the hometown hero Jean Pascal as he moved around the first round but the first significant blow came when a Jean Pascal right hand exploded with time running out of the round.

Both fighters took chances but little was landed in the opening minute of the second round but the general pace seemed slow punctuated by occasional blows being exchanged. This favored Pascal since he was fighting in his hometown plus he appeared to throw a few more punches in the opening rounds.   The problem facing Hopkins was that in a fight that one or two punches decide a round, it would make it difficult for him to win a decision but in the third round; Hopkins buckled Pascal knee as Hopkins finally got close to Pascal, but Pascal ended the round with a solid body shots.

The fourth round saw some exchanges between both fighters but Pascal threw the best punch with a solid right that stunned Hopkins at the end of the round.  Pascal was one of those awkward fighters who moved and waiting to strike; forcing Hopkins to pursue.  Pascal hand speed allowed him to connect on enough shots to win early rounds. Hopkins threw solid rights throughout the sixth round and while Pascal probably held a slight lead going into second half of the fight; Hopkins started to turn the fight into a rough affair that appeared bothered Pascal.  Hopkins used all his tricks to intimidate his younger foe.

Hopkins out landed Pascal with his punches in the seventh round as he connected on rights and occasional left hook and this continued into the eighth round.   One controversial moment came when a Hopkins landed a right hand that forced Pascal’s glove to hit the ground but it was called a slip; thus allowing Pascal to avoid a 10-8 round deficit for the round.

Going into the championship rounds, Hopkins appeared to have a lead on the score card as he consistently out punched his younger fighter but Hopkins had to know that in Pascal’s backyard, what happened in the ring may not be reflected on the scorecard.

In the final stanza, Pascal threw his biggest punch with a right hand that nearly send Hopkins down but Pascal didn’t take advantage of his opportunity as Hopkins boxed and held to keep the younger fighter off.  Hopkins survived the round and now only waited for the scorecard.  In the ring, Hopkins was more dominant in this fight than the first fight as Hopkins connected on double the punches than his younger opponent.  The decision mirrored what happened in the ring as Hopkins won the decision.

Hopkins upset Pascal as he became the oldest fighter to win a title and this was a fight in which the older fighter out thought and out smarted his more talented younger foe.  Pascal had the quicker hands and more power in his punches but he never could solve Hopkins defense and simply wilted under pressure.  This was a fight that guile beat talent.