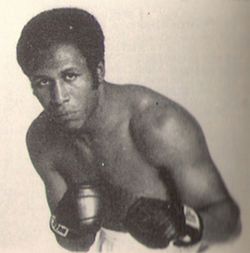 He began his career in 1964 but it was not until 1973 that he crashed into the heavyweight ratings.  In between were periods of inactivity and a multitude of meaningless bouts.  He was a murderous, punching prospect that no worthy opponent wanted to chance his career against.  By the time he got his “shot” at the big time, he was 21-1 with 16 kayos.  He scored seven 1st round kayos and eight 2nd round stoppages.  Yet up to this point his claim to fame was being a Muhammad Ali sparring partner.  It is a shame that today very few remember Jeff “Candy Slim’ Merritt.  True, his tenure as a mainstream contender was less than a year but oh what a reputation he had.  Many at that time considered him the hardest puncher in the heavyweight division, bar none fc4.

Although Jeff had one bout in 1964 his career really began in 1968.  In 1969 Jeff established himself as a legitimate prospect with decision wins over Ray Williams, Roger Russell and Henry Clark.  Finally on September 10th, 1973, Jeff stepped into the ring to face former W.B.A 절대그이 다운로드. heavyweight champion Ernie Terrell.  “Big” Ernie had held the W.B.A. title from 1965 to 1967 before losing a unification fight with Ali.  He then lost to Thad Spencer in the W.B.A 다운로드. eight-man elimination tourney and followed that with a loss to Manuel Ramos. A kayo victory over Jose Luis Garcia propelled Ernie back in to the Top Ten ratings.  Despite a very controversial loss to Chuck Wepner, Ernie was still ranked when he faced Merritt.  Less then one round later Ernie was a retired ex-champion as Jeff destroyed him.  Jeff followed this with a three round butchering of rugged Ron Stander.

Jeff kept his name in the headlines serving as Earnie Shavers sparring partner while Earnie prepared for his bout with Jerry Quarry.  Archie Moore was training Shavers and he allowed Merritt to spar with Earnie.  A couple of vicious hooks caused the Quarry bout to be postponed, as Earnie’s jaw was broken.  Don King, Earnie’s manager was livid.  Archie was dismissed and Quarry’s trainer Gil Clancey said something to the effect that Merritt was the kind of guy you fought for money, not in the gym.

All was going well until March 4th, 1974.  Jeff faced old foe Henry Clark.  This time Clark abandoned his usual cautious style and took Jeff by surprise.  Jeff was now the victim of a one round kayo loss.  The defeat put Jeff’s career into a tail spin.  It was almost 2 1/2 years before he would fight again.  His opponent would be tough fringe contender Stan Ward.  For two rounds Jeff out boxed the ponderous Ward, shutting one of his eyes.  In round three the half blind Ward connected and again Jeff’s chin betrayed him.  The bout was soon stopped and Ward had handed Jeff his ticket to boxing oblivion.