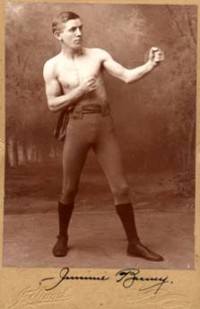 There is a boxer that nobody ever talks about these days visual studio 2015 무료. A boxer who seems to have been lost in the fog of time, but whom I rate as one of the finest to ever come out of Chicago! His name is Jimmy Barry. He was known as “Little Tiger” and this 5-feet-2 Irish kid was as good as they come 다운로드.

On September 15, 1894 Barry knocked out Casper Leon in the 28th round to win the bantamweight championship. They would fight in a rematch in May 1895. The bout was ruled a draw when police stepped in to halt the bout in the middle of the 14th round. He and Leon would eventually fight each other four times, with three of the fights being a draw and the other ruled a six round no-contest decision.

On December 6, 1897, at National Sporting Club, Covent Garden, London, England Barry defeated Walter Croot in the 20th round to gain undisputed recognition as Bantamweight Champion of the World. Croot died after the fight, due to injuries he received when he was dramatically knocked out cold with a tremendous right hand to the jaw. An autopsy ruled his death resulted from being hit with such force that his skull was fractured when striking the mat.

Jimmy Barry would go on fighting for two more years. But he was never quite the same fighter. Boxing historians believe that Barry just went through the motions without ever scoring or even trying to win by knockout.

Barry officially retired in the Fall of 1899 with a ring record of 70 bouts, 59 wins, no losses, 10 draws, 1 no-decision, 40 by knockout. He was undefeated , but never unable to shake the demons of the Croot fight. He closed out his brilliant career with eight consecutive draws.

Top rated heavyweight contender of that era Joe Choynski said, “Barry, I consider the greatest fighter I ever saw. He had everything: speed, science, stamina, ring generalship, courage and uncanny punching power. There were many great bantams in that day, but Barry outclassed tem all”

Barry died in Chicago, Illinois on April 5, 1943 at the age of 73. He was inducted into the International Boxing Hall of Fame in 2000.

One thought on “Jimmy Barry”