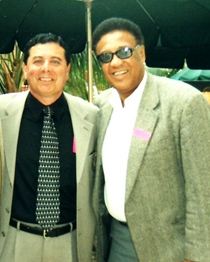 Earlier this week, on May 6, 2014, former WBA heavyweight champion Jimmy Ellis passed away 다운로드. He was 74 years old.

Ellis beat Jerry Quarry in 1968 for the vacant WBA title. He only made one defense of the title against Floyd Patterson in Stockholm, Sweden that many, including me, thought he lost 카타나 제로 다운로드. In 1970, at Madison Square Garden in New York City, he lost to Joe Frazier in a heavyweight unification championship bout .

Born in Louisville, Kentucky, Ellis was a former sparring partner to Muhammad Ali and both were trained by Angelo Dundee 이클립스 jdk 다운로드.

I  was truly blessed to have met Jimmy Ellis in my tenure as a Board of Director with the World Boxing Hall of Fame. He was such a kind and gentle man and always appreciated the fans that loved him 다운로드.

His professional career began in 1961 and he retired in 1975. He had ring record of 40 wins, 12 losses, and 1 draw with 24 knockouts. Jimmy Ellis will be missed, as he touched many of us, and may his soul be rested peacefully in heaven with the Lord 다운로드.