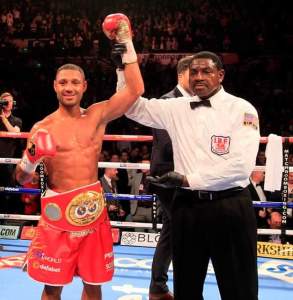 Kell Brook defended his  IBF welterweight championship against Jo Jo Dan in Great Britain.  Brook had yet to test defeat and his Romanian opponent was a southpaw, a style that Brook has not fought nearly in six years.   Brook got off to fast start as he nailed Dan from various angles in the opening round.    Brook sent Dan down with an upper cut within the first minute of the second round and Dan got back up; only to go down from another quick right.  Dan went into survival mode as he hold and threw punch from any angles from close in.  Brook nailed Dan with three big rights over the final two minutes but Dan survived 다운로드.

Brook continued his assault as he unleashed power shots, in particular his right hand throughout the third and fourth round.   Late in the fourth round,  Brook’s right sent Dan down and Brook tried to finish the job.  Brook connected on power shots, forcing Dan to retreat.  At the 2:59 mark of the fourth round, a Brook left hook sent Dan down.  Dan wobbled back to his seat and his corner stopped the fight as they saw that he has taken enough punishment 다운로드.

Gary Russell, Jr wanted to take that step to another level against champion Jhonny Gonzalez, something he failed to do in his first loss to Vasyl Lomachenko.  Russell used his quick hands to land combinations as Gonzalez simply took Russell shots without any effective countering.   Russell used more variety in delivering punches including body shots and straight left but during the third round, Gonzalez did manage to land a big left hook to the body 시크릿 가든 대본 다운로드. At the end of the round, Russell landed a big right hand hook that caught Gonzalez flush and sent him down for an eight count. 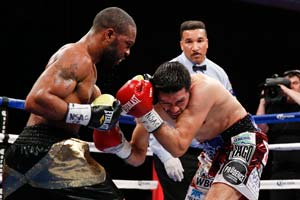 Russell landed a straight left hand at the beginning of the fourth round that sent Gonzalez down a second time.  Gonzalez got back up but Russell used quick combinations and ended those combinations with a big right hand hook that forced referee to stop the fight.   Russell captured the WBC featherweight champion in surprising style by knock out.

Kell Brook showed why he might be one of the best welterweights with his easy demolition of Jo Jo Dan following his victory over Shawn Porter.  Brook recovered from being mauled by a machete while on vacation and in his fight against Dan, he never looked like he lost a step from recovering from injuries.

Brook is part of what is becoming a deep division and this victory sets up two possibilities, the first being a bout with fellow British fighter Amir Khan. Khan wants this fight since this would be a major event in Great Britain but Brook is looking for even a bigger possibility, the winner of the biggest PPV fighter ever; Mayweather-Pacquiao.

As for Russell, his loss to Lomachenko left many wondering if Russell was overhyped fighter who got where he was by fighting pugs and tomato cans but his mastery over Gonzalez showed us the fighter that we were waiting for.  It wasn’t just the quick hands but his power as Russell stood within Gonzalez wheelhouse and he not only slip many of Gonzalez shots but he also landed effective body shots that set up the head shots.  Russell took that step to elite status within the featherweight division and with his knockout, he was able to show the rest of the division, he is now ready for bigger bouts.  With a championship belt, he has reached a pinnacle.