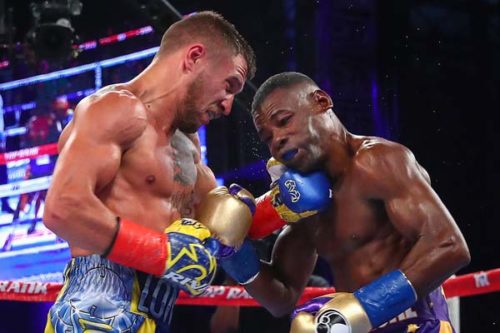 The hype was certainly there for a much anticipated match-up between two decorated 2-time Olympic gold medalist  (southpaw) champions, but the hype wasn’t near the competitiveness of the fight itself 다운로드.

WBO junior light champion Vasiliy Lomachenko (10-1 / 8 by KO) dominated previously unbeaten Guillermo Rigondeux (17-1 / 11 by KO) over six rounds before Rigondeux quit on the stool before the bell rang for the seventh round, reportedly due to a injured left hand 다운로드.

A sold out crowd at The Theater in Madison Square Garden, New York and the millions watching on ESPN were treated to Lomachenko in perfection.

After a slow feeling out round one, Lomachenko picked up the pace and connected with shots that frustrated Rigondeaux 와이파이 다운로드.

As each round progressed, it became more apparent that Lomachenko was the superior of the two, and he became more confident as a lion lurking its prey.

After prior warnings by the referee, a point taken away from Rigondeaux for holding in round six.

Rigondeaux had come up two weight classes from 122 pounds to the contracted 130 pound level, but what was more surprising to me was not so much the weight, but how he turned old overnight in this fight.

At 37 years old, the end of a great career seems evident for Rigondeaux, and by contrast a bright future for Lomachenko.

It’s just a matter of time before Lomachenko moves up in weight to bigger game and he will remain a strong force in boxing in the years to come in any weight class he may choose.