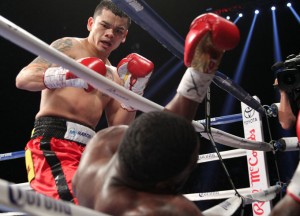 Renowned boxing writer and author / contributed to this website since 2008

Adrien Broner challenged the tough Marcos Rene Maidana in a bout determining his place in the peeking order of elite boxers.  Showtime began their last card of the year with Beibut Shumenov defending his light heavyweight title against the undefeated Tamas Kovacs.  While Kovacs showed excellent boxing over the first two minutes and forty seconds, Shumenov nailed Kovacs with a solid left hook that sent Kovacs down 다운로드.

Throughout the second round, Shumenov moved closer to Kovacs as his pressure showed results.  A Shumenov left to the body sent Kovacs a down a second time and Kovacs was down 20-16 after the first two stanzas.   Shumenov finished the bout in the third round with a right hand that send Kovacs crumbling to the canvas; forcing the referee toe stop the fight 밀크티.
Cesar Seda started countering punching over the first two rounds against the champion Leo Santo Cruz whereas Cruz managed to nail Seda with some good solid shots of his own.  The fourth and fifth round saw Cruz started to take command of the fight and Cruz managed to score a quick flash knockdown 역전 재판 1 다운로드.
With the fight two-thirds down and going into the final four rounds;  Santa Cruz connected on more punches and his power pushed Seda round the ring.  Seda attempts to counter punch did little to force Cruz to retreat and faced the daunting task on trying to change the momentum.
Throughout the ninth through eleventh round, both fighters let loose but Cruz appeared to be the more accurate as he unleashed body shots to go with head shots but Seda landed a few effective counters.  Over the first minute of the final round, Cruz nailed Seda with right hand but Seda countered with a three punch combination before setting into a moderate pace over the next minute,.  The final minute in half reflected the previous thirty four minutes of the bout as both fighters’ unleased punches in bunches but it was Cruz punches that had more pop.    The bout was scored 116-112, 115-112, and 117-110 in favor of Leo Santa Cruz but Seda showed that he belonged as he fought an excellent fight only to lose to a stronger fighter.
Keith Thurman fought for the interim WBA Welterweight title against  hard punching Jesus Soto Karass.  For Thurman, it wasn’t just the title but a shot for a bigger pay day including a fight against Broner-Maidana winner.  In the first thirty seconds, Karass nailed Thurman with a right hand and nearly derailed the undefeated Thurman shot at the title but Thurman recovered to box.    If Karass won the first half of the round, Thurman jab took control of the round as it allowed him to set up combinations.  Thurman hurt Karass with a right hand of his own as time ran out of the first round.
Thurman used his boxing skills in the second round as he boxed rings around the slower Karass.    Karass strategy was to hit Thurman in the body to slow Thurman down and Thurman nailed Karass with solid combinations. Going into the fifth round, the Showtime announcers viewed this bout was becoming a battle of attrition.   With fourth five seconds left,  Thurman sent Karass down with a left-right combination but Karass got up and continued to march forward into Thurman’s left jab.
Throughout the sixth thru the eighth round, Thurman used his jab to set up combinations and Karass couldn’t cut off the ring due to Thurman foot movement.  In the ninth round, Thurman landed at will and within a minute into the ring, Thurman left hook stopped Karass. From there Thurman landed a right hand that spin Karass head round, followed by a left hook and one more right sent Karass toward the canvas. The referee braced Karass’ fall and stopped the fight.  Thurman landed at 44% of his punches, nearly doubling his opponent and showed that he can go from being a boxer to puncher.
Marcos Rene Maidana started off fast as he landed a right hand over Broner’s defense and forced Broner into the ropes as he pounded Broner body.    Maidana won the first round easily as Broner played defense and didn’t throw counter punches back.    Maidana sent Broner down with a right hand within the first thirty seconds of the second round and he chased Broner around the ring.  Broner did countering half way through the round but Maidana seemed unfazed by Broner’s punches.
Broner boxed better in the third round than in the previous round.   Throughout the fifth round, Maidana invested in body shots while landing some shots to the head while Broner landed combinations including hooks to the body and head plus uppercuts.    As Showtime Al Bernstein noted of the fifth and sixth round, Maidana threw more punches but Broner more accurate.    Going into the second half, Maidana started out fast as he tried to take Broner play away but Broner rhythm started to take effect over the second half of the seventh round.
Broner went down a second time in the eighth round from Maidana’s left hook but Maidana lost a point for head butt that stunned Broner.    Maidana won the round but the point deduction cost Maidana a two point round.   Maidana spent the first minute of the ninth round clobbering Broner from one side of the ring to the other as Broner punched very little.   Maidana continued his assault throughout the tenth round as he landed vicious body shots, and clubbing right.
Broner came out strong in the eleventh round over the first half of the round but Maidana came back strong over the second half of the round as he forced Broner to retreat.  This was one of those rounds could go either way as Broner won the first half but Maidana the second half even though Broner got away with a left hook after the bell.   With one round left, Broner title was on the line and Broner come forward, landing stiff jabs and left hooks.  With a minute left, both men landed left hooks but Broner kept coming forward.  Broner fought the last round with desperation and even hurt Maidana but the question remained how would the judges view this fight?  Maidana threw more punches and landed more whereas Broner was more accurate.  The scorecard came out 115-110, 116-109, and 116-109 for the new champion Marcos Maidana.

Adrien Broner fought against a tough fighter and took big shots; showing courage but this was Maidana’s night.  In one of boxing better years in decades; this fight was the exclamation point for a great year.