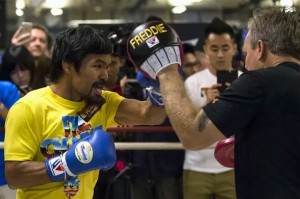 Pacquiao was so dominant that all three judges gave him every round in the fight.  If it were bowling, it would be a perfect score of 300.  My unofficial scorecard was 120-102 on points psnstuff.

Personally, prior to the fight, I made the statement “Pacquiao would win big and that Algieri has about as much business in the ring as I do.  Pacquiao’s sparing partners give him a better fight in the gym.”

Algieri came into the fight as the undefeated WBO junior welterweight (140 lb.) champion, and moved up to a catch weight of 144 pounds, with Pacquiao coming down from the welterweight (147 lb.) limit 다운로드.

Manny Pacquiao’s speed was the key to victory from the opening moments of the fight. Pacquiao landed 229 of 669 punches (34 percent), with Algieri connecting on only 108 of 469 punches (23 percent).  The 35 year old Filipino icon has certainly had a spectacular career, but the one bout that would be signature is the most talked about fight in boxing… versus Floyd Mayweather.

In a post fight interview, Manny said “The people deserve that fight. It’s time to make that fight happen. It’s been a long time.  I want that fight. They’re always denying the fight.  I think the fight has to happen.”

During my involvement in boxing, the biggest fight at the time it was signed – and this one did happen – was March 8, 1971 between two undefeated heavyweight champions, Joe Frazier and Muhammad Ali, a bout that is still called “The Fight of the Century.”

As Frazier vs. Ali did take place, I am still optimistic that Mayweather vs. Pacquiao will happen; and I just hope it will be sooner than later, because boxing needs another “Fight of the Century”… in this century!