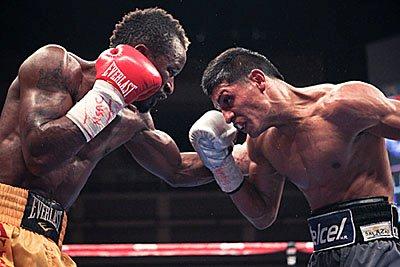 Mares came out fast in the early rounds, and even knocked Agbeko down for a brief knockdown in the first round.  Mares launched a series of combinations as Agbeko started to slip and a left hook on the top of the head sent Agbeko down.  Agbeko got back up but Mares simply attacked over the last minute of the round 마이크로 비트.

The second and third round saw Mares attacking the body with left hooks and occasionally low blows along with solid rights to score effective.  Agbeko timing looked off and his jab ineffectual.  His right hand, his best punch, was non-existent.  It wasn’t until the last minute of the fourth round that Agkebo finally connected on a solid left 다운로드.

Mares had a big lead going into the second half of the fight but the veteran Agkebo started to connect on solid shots on his own and even nearly stopped Mares, who got nailed with a solid right in the eighth round.  Mares started to wear down and this showed in the eighth round as he kept missing shots he connected on earlier.

Starting in the eighth round, Agkebo became more aggressive and in the tenth round, Agkebo landed solid combinations including his patented right as he started to close the gap in scoring.

The eleventh round was the most controversial.  Agkebo continued his pace of the previous round and may have been winning the round when he got nailed with what looked like a low blow.  Agkebo went down from the blow but the referee called it a knockdown.  What could have been a 10-9 Agkebo or at worse 10-9 for Mares turned into Mares second 10-8 round and this clinched the decision for Mares.  Mares simply had to stay standing after the second knockdown and he did exactly that as he boxed away from the pursuing Agkebo in the final round.

Mares is an excellent fighter and combines body shots with accurate right hands but this bout will tarnished his image for the near future. (Years from now, this bout will merely be a result in record books and much of the controversy long forgotten.)

A rematch would be good for interest in bout would be at all time high and certainly Agkebo deserve a second chance.  Had Agekebo won the eleventh, he still would have lost the fight by a close decision.  However a split decision victory for Mares would have been a closer affair but Mares did win because his work in the early round.

The bout may have been overshadowed by the constant fouls but as Mares career continues, this is merely a road bump. As for Agkebo, he adapted to his opponent style and found a way to make the fight competitive as he figured how to get his right hand over Mares left.

Mares began the first step into becoming a super star as he won not just a title but the championship of the Showtime bantamweight tournament.  The poorly officiated fight overshadowed what was a solid competitive fight between two evenly matched opponents.