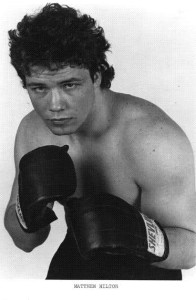 This was a young man that had world champion written all over him 다운로드. He had all the potential in the world to have become a boxing superstar. He did achieve the status of world titleholder due to the fragmented title system of the day but I thought he would have accomplished so much more 가톨릭 기도서. Only Tony Ayala Jr. in that era disappointed me more. What a great fighter Matthew Hilton could have been.

He defeated former middleweight champion Vito Antuofermo to win his nineteenth straight victory 다운로드. In win number twenty he demolished the great Wilfred Benitez in nine brutal rounds. What a future was ahead for Matthew Hilton or was it?

He was 26-0 when he entered the ring to face IBF Junior Middleweight champion Buster Drayton in 1987. Hilton proved to be much too strong for the game Drayton and Matthew was now a world champion. Matthew would lose his title in 1988 via a stunning upset to Robert “Bam Bam” Hines. This would be the beginning of Hilton’s demise.

In 1990 he would challenge WBO middleweight titleholder Doug DeWitt. The gritty DeWitt survived Hilton’s early bombardment and came back to halt Matt in round eleven.

Here’s what I remember about Matthew Hilton. At his peak he was pound for pound one of the strongest fighters I’ve ever seen. He was a tremendous body puncher. When Matt was at his peak he was a very formidable fighter.