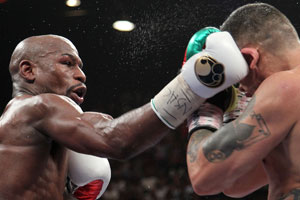 Floyd Mayweather and Marco Maidana was the main event but on the undercard, there two big fights that would have significant effect on the future of the Welterweight and junior Welterweight division.    Two fighters, Adrien Broner and Amir Khan found themselves in bouts that could determine their future 다운로드. Amir Khan bout with Luis Collazo would have a direct effect on Floyd Mayweather sweepstakes.   Khan thought he was going to be the main event but Maidana got the call instead.  If Khan wins, he is on his way to a big fight with Mayweather ds file. Lose and it could be Collazo who will be picked.  As for Khan, a loss would set back his career.

Broner last fight was a demolition at the hands of Maidana and now he was moving down to junior Welterweight to put his career back on track.  So two fighters found themselves with bouts that would determine their immediate future and whether they are going to be part of big money fights over the next twelve months 다운로드.
Broner was the first to display his skills and while he won an unanimous decision, it hardly impressive.  Broner did not hurt Molina with shots and he did not use many combinations against Molina.  There were times that Broner hands looked slow and not like a boxer in his prime.  This was hardly a victory that will make fans forget his loss to Maidana or salivate over his next fight.

Amir Khan won an easy victory that included knocking Luis Collazo down three times.  There were times that he looked like the Khan of old with fast hands combine with powers. Then there were times that he held Collazo and even lost a point for excessive holding.  He continuously held Collazo head down and in the eighth round, Collazo nailed Khan with a low blow for which he lost a point.
Within the first 20 seconds of the fourth round, Khan dropped Collazo with a short right hand but over the second half of the round, it was Collazo who dominated the action.   In the tenth round, Khan sent Collazo down twice with uppercuts and in the eleventh round, Khan cracked solid combinations off Collazo.  The twelfth round showed the negative aspect of Khan’s performance as he continuously held Collazo head down and suffered low blows as result.   Khan is now hoping for his shot at Mayweather but he might have to wait a little longer if Marco Maidana has his way.

Maidana is a tough fighter and showed it Saturday night as he attacked Mayweather all night.  Mayweather learn quickly that Maidana was not easy to knock out or down but he also found out that Maidana will keep pressing the action.  Over the first three rounds, Maidana forced Mayweather on the rope with constant pressure and when Mayweather tried to fight back, he got clipped.

Not since his fights with lightweight champion Jose Luis Castillo had Mayweather seen this amount of pressure.  Mayweather is use to dominating most fighters as his defensive wizardry and quick hands forces the most brave of fighters to hold back.  Not Maidana who simply went through Mayweather’s punches. Maidana pushed back and refuse to be intimidated by Mayweather.

Mayweather showed his best stuff over the second half of the fight as Maidana slowed down just enough to allow Mayweather to get off combinations. Throughout the ninth round, Mayweather fought in the middle of the ring, jabbing effectively which set up solid power shots with his left hooks and right hand.
In the tenth round, Mayweather boxed and landed a one-two right at the start of the round.  Mayweather landed enough salvos to take the round and ended the round with a big right hand.
In the final round, it was Mayweather who landed the bigger and more effective shots which featured his lead right and counter rights.  As the fight ended, the crowd were on their feet and mostly rooting for the underdog. The judges had it a majority decision in favor of Mayweather but while Mayweather winning is hardly robbery, a case could easily be made for Maidana.  One judge had Mayweather winning 9 rounds and another 8 rounds but I couldn’t really count Mayweather winning 9 rounds. Seven rounds yes but not nine.  Maidana gave Mayweather his toughest bout in over a decade and this is actually worth a repeat performance.  Whether team Mayweather would want to risk another fight with the Argentinian fighter is another thing.
So does Mayweather fight Khan? Khan looked good at times and then there times that memories of past knock outs encourage Khan to simply hold and grab in between rallies. On the other hand, Maidana showed he belong in the ring with Mayweather and proved a worthy adversary.  Which fight would the fans prefer to see?  And which fights garner the most money?  The money part may be just enough for Mayweather risk it all against Maidana.