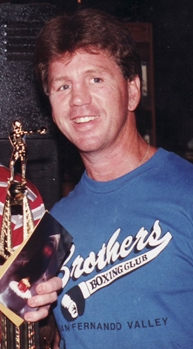 Somewhere lost in the shuffle was a smooth boxing Irish kid named Mike Quarry. Mike always seemed to be in the shadow of his famous heavyweight brother Jerry Quarry. Truth is he carved out quite a career for himself. After a 24-2-2 amateur record, Mike turned pro in1969. After reeling off several wins to help build up his record, Mike won his fist major bout outscoring Welshman Eddie Avoth in 1970. Mike crashed the light heavyweight rankings when he won a decision over ex-title challenger Andy Kendall. Mike then won two verdicts over rugged Ronnie Wilson. Quarry then closed out a great year by winning a technical decision over the capable Jimmy Dupree for the NABF light heavyweight title.

Mike was now 35-0 and on June 27,1972 he challenged the reigning world title holder Bob Foster in Las Vegas. Mike started well and it appeared Foster was going to get a fight from the young boxer. In round four Mike jigged when he should have jagged and Foster landed one of the most brutal left hooks I’ve ever seen. In an instant Mike was flat on his back and it would be several minutes before Quarry returned from dreamland.

Many have said that Mike was never the same boxer. Looking at his record,I don’t believe it for a minute. After the Foster set back Mike posted a 27-13-6 record against some very formidable competition. In 1973 he defeated the colorful Ray “Windmill” White. He drew with with the always tough Hal Carroll. He would drop a verdict in Denmark to Tom Bogs. He then fought to a draw over twelve rounds at Madison Square Garden’s Felt Forum against Cleveland’s Billy Wagner. It was rumoured that if Wagner won that fight,he would receive a crack at Foster’s crown. Mike finished the year dropping decisions to Kendall and England’s Chris Finnegan. No chumps in that bunch.

In 1974 he lost a points call to Pierre Fourie. He would then decision Gary Summerhayes and Karl Zurheide.He would travel back to the Felt Forum and upset previously unbeaten Pedro Soto.In 1975 he whipped Joe “King” Roman but then lost to highly regarded Yaqui Lopez. In 1975 Mike defeated future world champion Mike Rossman over ten rounds. In 1976 he would post wins over Eddie “Red Top” Owens and Tom “The Bomb” Bethea but lose a ten round rematch to Rossman. In 1977 Rossman would halt Mike on cuts to win their rubber match.

The loss to Rossman pretty much finished Mike as a viable contender. From 1978 to 1982 Mike went 3-4-2. He suffered kayo losses to Pete McIntyre, Tommy Evans and Bunny Johnson. Mike retired in 1982 after 81 professional fights. His final ledger was 62-13-6 with 16 knockouts. He was halted five times. Four of those stoppages came in his last ten fights.

Mike like his brother Jerry would suffer from advanced pugilistic dementia. It claimed Jerry’s life in 1999. It took Mike on June 11,2006. Both brothers were way too tough for their own good. Although Mike would always be regarded as Jerry’s little brother, he more then proved his worth as a world class fighter. He met two world champions and nine others that challenged for a title.

7 thoughts on “Mike Quarry; he was more than Jerry’s little brother”