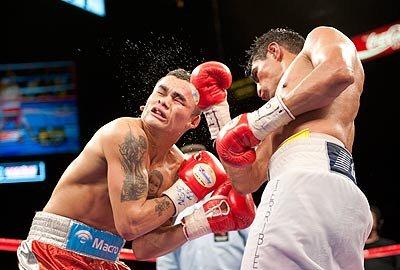 Erik Morales was a Hall of Fame fighter but those days were long past and what he had left was the question as he faced the tough Marcos Maidana in a night called Action Heroes.

In the first round, the big fears about Morales looked justified as Maidana jabbed Morales and forced Morales to the rope.  Morales managed to connect with a left hook but whatever quickness he had seemed to disappeared and his eyes started to swell from Maidana punches.  Maidana started to connect when he trapped Morales on the rope.

Morales tried to keep his distance from Maidana but he was unable to keep Maidana left from connecting.  Toward the end of the second round and after being dominated, Morales finally nailed Maidana with a right and left that stopped Maidana briefly while fans went wild 다운로드.

Morales came out of the third round popping his jab but received a Maidana right in return but he did managed a left right combination.  Throughout the round, Morales managed to land some good combinations but his right eye started to shut.

Maidana tried to trap Morales on the rope in the fourth but Morales managed to escape and seems to be able to get an offense going while blocking some of Maidana incoming bombs and referee warns Maidana bout head butting so a little desperation on the part of Maidana?

Maidana attacked Morales hard at the opening of the fifth round, but Morales counters the hard charging Maidana and gets the better of the exchanges.  In one exchange, Maidana lands a right but Morales connects with his own right followed by another right and then a left hook to Maidana chin.  Morales had his best right round of the night he consistently nailed Maidana with left hooks and right uppercuts 다운로드.

With Morales gaining momentum in the fifth round, Maidana chased Morales by unleashing combinations and Morales countered back with a right hand.  Morales showed the guile of a veteran as Maidana missed with his punches while getting countered.  Over the last thirty seconds Maidana forced Morales to retreat, but Morales nailed Maidana with solid shots as he retreated away from Maidana. Could the pundits be wrong about Morales? Halfway through the bout, Morales looked like he can go toe to toe against one of the hardest punching junior welterweights.  If Morales looked old in the first round, he looked like a master going into the second half of the fight.

Throughout the next two rounds both men connected with solid shots but at the opening of the eighth round, a Morales left hook nailed Maidana but Maidana stayed on his feet while he nailed Morales with a solid right but Morales lands another big left.  As the eighth round concluded, it was Morales who looked fresher 다운로드.

Maidana threw some vicious left hooks to the body while Morales covered up for the first minute of the ninth round but after that brief Maidana right, Morales connected with a right hand, left hook followed by right upper cut.  Maidana forced Morales to the rope and both throw inside shots as it is becoming a tougher fight to score. Certainly by the ninth round, many pundits were not expecting Morales to be around, much less this being a competitive fight.

In the middle of the tenth round, Morales forced Maidana to retreat with a right hand cross followed but an uppercut.  Maidana tied Morale up after the uppercut.  Morales landed some solid left uppercut inside the rounds concluded with a clubbing right hand by Maidana that shook Morales.  This set up the eleventh round beginning as Maidana dominated the action with left hooks and right hands that forced Morales to retreat and while Morales motioned Maidana in, Maidana obliged and got the better of the exchange. Maidana appeared to have the edge going into the final round but now it looked like the final round could determine the winner.

Maidana began the last round by attacking and trapping Morales while landing body shots but Morales managed to land a right upper cut but missed with the left hook.  After faking with his right, Morales nailed Maidana with a left jab and wobbled Maidana with another left jab but Morales suffered from a Maidana left hook to the body as the time wound down, both fighters go for it but Maidana ended the fight with a left hook.  Morales surprised the boxing world by not just finishing on his feet but putting on a remarkable performance against a naturally bigger man 다운로드. Morales lost a majority decision to a tough, younger fighter but won the audience with his courage and guile.

Paulie Malignaggi fought Jose Cotto, the brother of Miguel Cotto who had previously defeated Malignaggi.  Malignaggi showed speed and defensive elusiveness but cursed with no knockout power throughout the career and often he faced fighters with more pop.  Cotton had 24 KO’s in his career and he was hoping to do Malignaggi what his brother did previously.

In a big surprise, the tough James Kirkland came out smoking against Nobuhiro Ishida as he attacked,  he left himself open for a Ishida right hand that send the favored Kirkland down.  Kirkland rose but Ishida launches more right hands as Kirkland went down a second time 다운로드. Shaken, Kirkland got up one more time but now Ishida was hitting him at will and essentially pounded Kirkland from one post to another.  Kirkland went down a third time and this time; the referee stopped the action as Ishida knocked the zero from Kirkland record.

Robert “the Ghost” Guerrero landed a nice left, right followed by another that buckled Mike Katsidis in their first round and as fight went through the its first half, the action picked up with Guerrero getting the best of it just as in the fifth round, when he beat Katsidis in a battle of hooks that nearly sent Katsidis down. Guerrero’s jabs opened up a cut under Katsidis eye.

Throughout the second half of the bout, Guerrero unleashed several nice combinations, and in the eighth round, Katsidis lost points for low blow and then gets nailed with jabs, right crosses and uppercuts but he managed to keep coming forward and stay on his feet 다운로드.

In the ninth round, Guerrero keeps connecting on solid shots but he did lose a point for a low blow while Katsidis kept fighting hard even though he was getting the worse of it.  This continued through the tenth and eleventh round as Guerrero jabbing and more accurate power punching carried the day.

In the final round, both men score with some good shots as Katsidis went for a knockout as he landed a left hook but not much steam whereas Guerrero punches still had snap on his punches as he landed solid left and rights.  Guerrero won an easy decision and showed his skills at yet another division.

This was a wild weekend of boxing beginning with Friday night.  David Lemieux was to use Friday night as his introduction to the boxing world as he faced Marco Rubio but Rubio decided to crash the introduction.  For the first four rounds, Lemieux dominated the action but at the end of the fifth round, Rubio showed that he could hurt Lemieux and Lemieux fought much of the sixth as to avoid being punished.  In the seventh round, Rubio nailed Lemieux with a  solid right to the ear and this started a weekend of upsets as undefeated contenders and prospects saw their career twisted around 다운로드.

SHOBOX was upset central when undefeated Willie Nelson lost a tough decision to a Vincent Arroyo and became the first of three favorite undefeated prospects to lose.  In the next bout, Danny O’Connor lost his zero to Gabriel Bracero, another undefeated fighter.  Bracero simply out grunted and outworked O’Connor to gain an easy decision but the biggest upset came when undefeated Marcus Johnson could not figure how to fight Dyah Davis. Davis used the entire ring and Johnson showed no ability to cut off the ring and force Davis to fight.  Of all the losses, Johnson will be least likely to hurt simply because he lost to a good fighter with a better fight plan. And unlike Nelson, who kept hitting the canvas, Johnson was hardly punished with the exception a body shot that sent him down in the ninth round.

On the following night, James Kirkland was going to be showcased as part of the Morales-Maidana card as he faced Nobuhiro Ishida.  Kirkland was a major prospect on the rise before he took a prison detour for two years and now he was back prowling for a title hunt.  Unfortunately, Ishida was not informed that his job was to provide good competition before succumbing to the inevitable; instead he came out smoking with solid right hands that consistently nailed Kirkland.  Three right hands, three knockdowns, fight’s over. Kirkland showed a major weakness, vulnerability to right hands; something that need to be corrected.

Paulie Malignaggi looked like Malignaggi of old as he simply out fought Jose Cotto whereas Nate Campbell simply looked old in losing to Danny Garcia.    Robert “the Ghost” Guerrero looked like a real champion as he defeated Mike Katsidis in impressive style.  Guerrero unleashed a variety of punches as he simply dominated the action against a solid performing as he fought for the WBO and WBA interim championship. (So what is with interim Championships. How about simply a championship bout but these sanctioning bodies keep confusing the boxing scene, with interim and silver championship, before you know it each division will have three champions for each belt?  There is a word to describe it, absurd.)

Pundits will look at facts when determining who will win a fight or simply how the fight should proceed.  When asked by Radio host LA Batchelor how the fight will proceed, I did not see a close fight and most likely an ignorable defeat.  I remember seeing Morales in his last big fight as a lightweight against David Diaz and Diaz dominated the former great champion.

On this night Morales fought a great fight against a younger, stronger fighter and nearly pulled it off.  He could have easily been declared the winner but as one pundit noted, he showed he belonged in the ring.

This was a case where a Hall of Fame fighter did not read the critics notices and instead found something extra to pull from his old body. Using guile and skills developed over the past two decades of fighting, Morales showed his younger fighter a few things in the ring.  Maidana is a tough hombre but he is not technically sound fighter.   Maidana depended upon his power and ability to take punches.  Morales showed the younger fighter the ways of the ring and his skills allowed him not just to escape heavy damage but to score some devastating combinations.  There were times that Morales looked like the Bull of yore but in the end, Maidana barely avoided a loss.   Morales is now back in the thick of more big money and possible championship bouts.

Finally, Tomasz Adamek easily defeated Kevin McBride in a tune up for Adamek’s bout with one of the Klitschko’s brothers.   Adamek is a very good fighter and one of the better pound for pound with both a light heavyweight and cruiserweight championship belt but his rise on the heavyweight division has featured mostly has been and never were.  The only top ten fighter he has fought in the Heavyweight division was Chris Arreola but nothing of note beyond that. As for McBride, his moment of glory was beating an old Tyson in Tyson’s last fight and he never truly took advantage of that moment.   Adamek is in line to fight for a title and last Saturday, he had a sparring session with a big tall fighter to prepare himself for one of the Klitschko.  A sparring session that he got well paid for.