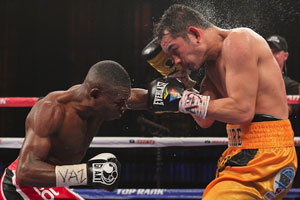 Nonito Donaire faced the undefeated and fellow 122 pound champion, the flashy Guillermo Rigondeaux.  The opening round saw Rigondeaux nailed Donaire with two solid left as Donaire moved aggressively forward.    Rigondeaux landed the harder blows as his left consistently hit Donaire and even landed a solid right hook against the Philippine flash 최신 코덱 다운로드.   The pattern was set for the whole fight as Donaire played the bull and Rigondeaux, the matador who was forever tormenting the bull before final bell 다운로드.

In the second round, Rigondeaux showed his defensive mastery as he avoided Donaire big shots while countering Donaire.  Donaire problem increased in third round as he couldn’t really connect with any consistency as Rigondeaux continued to slip Donaire big shots.  Donaire landed two big rights in the last thirty seconds but Rigondeaux countered back with two solid shots 코믹 메이플스토리 다운로드. When Donaire did land, Rigondeaux had an answer.
After the losing the first two minutes and forty seconds of the fourth round, Donaire landed two big left hooks but immediately Rigondeaux struck back with two accurate left of his own and with a third of the fight over, Donaire had yet win a round.
In the fifth round, neither fighter threw many punches but just like the previous round, Rigondeaux landed the more accurate punches and Rigondeaux defensive style force the pace of the fight to nearly crawl at times.  Donaire simply seemed afraid of throwing punches as he feared getting nailed with those stinging left.
As the first half of the fight ended, there was no doubt Rigondeaux boxing skills dominated as it would have been hard to award any rounds to Donaire who was being taught the fine art of the sweet science by Rigondeaux.    As the eighth round began, the restlessness of the fans showed as they booed while Rigondeaux did the boxing version of four corners.  Rigondeaux simply moved from one corner of the ring to the other as he simply pot shot Donaire, who continued to fight in a confuse fashion.
The ninth round was the same as the others as Rigondeaux simply was prepared to fight Donaire.  In the tenth round, Donaire came out with determination and finally he connected as a left hook sent Rigondeaux down for a quick knockdown .  Donaire finally won a round and it was a 10-8 round.  With  two rounds left, Donaire had no choice but to win by knock out.  With the knockdown in the tenth, excitement was back in the fight.
Donaire continued to be aggressive in the eleventh round but unlike the tenth round, Rigondeaux countered while maneuvering Donaire in position to launch his left hand.   At the beginning of the twelfth round, it was Rigondeaux who hurt Donaire and Donaire right eye swelled to a point he couldn’t see out of it. (The swelling caused by a Rigondeaux’s left.) Donaire right hand was up in an attempt to block Rigondeaux quick strikes from doing any damage to his injured eye and on occasion, threw his solid left hook but hit nothing but air. Rigondeaux simple moved out of harm ways from those wild Donaire shots.
The judges had the fight closer than what happened in the ring as one judge had it 114-113 and another 115-112.  Julie Lederman had it by a wider margin with Rigondeaux winning 9 rounds.  What the boxing fans saw was a fighter who showed mastery of the art of boxing.  Donaire was one of the best pound for pound and a fighter who had been destroying his opponent, but on this night Rigondeaux  showed how the sweet science at its best.