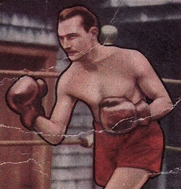 ( 1 ) What heavyweight boxer, after his career, went on to have a role in the original TV series The Untouchables?

( 3 ) Who did Rocky Marciano lose to in the amateur ranks, but would never fight later as a professional 윈도우 10 rs2 다운로드?

( 4 ) Who was the first boxer to knock down Muhammad Ali in his professional career?

( 5 ) What sport did former WBC welterweight champion Carlos Palamino play at a semi-pro level before starting a professional career in boxing?