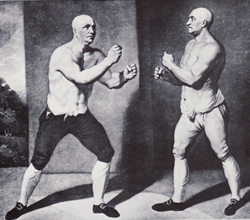 1)  What else (job) did the late legendary referee Arthur Mercante do for a living 더파이팅 만화책 다운로드?

b) has little power behind punches – is correct answer

d)  quick movement up and down

3)  On October 7, 1959, in New York, former heavyweight champion Jersey Joe Walcott lost in a “Boxer vs 다운로드. Wrestler” exhibition match against Buddy Rogers – what wrestler did Walcott have in his corner as his advisor?