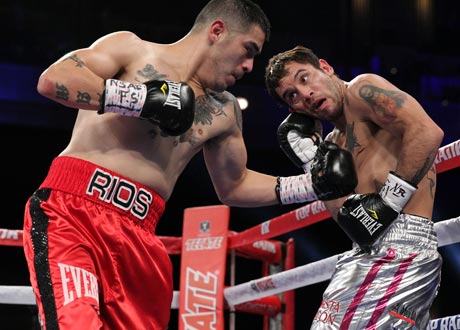 I am not sure what to make of last Saturday night fights in Vegas other to say Referee Vic Drakulich became the main story, not the fighters.  You could easily make the case that Jesse Vargas won his fight but the judges favor the hometown fighter with scores he didn’t deserve.  Vargas-Novikov was a close bout which I had in favor of Vargas, barely 다운로드. However, Novikov could easily been rewarded the decision and I wouldn’t have complain simply because it was that close.  The judges had it 118-111, 118-111 and 117-111 in favor of Vargas 다운로드.

Vargas dominated the early portion of the bout as he nailed Novikov with solid right hand shots but Novikov started to pound the body and connecting with his own combinations as the fight progressed.  Vargas slowed down over the last quarter of the fight and Novikov pressure appeared to make the fight closer but as we found out, the fight was never in doubt on the scorecard 옵티머스 g 펌웨어 다운로드.

As for Rios-Chavez, it was a rough, tumble fight and both fighters were not above some dirty tactics but Drakulich essentially handed the fight to Rios.  Brandon Rios complained about Chavez putting his thumb in his eyes but both fighters were guilty of rough tactics and Rios did his share of head butts. The fight was close with Chavez ahead by one point on two judges’ card and Rios ahead on one point on one card.  Chavez had a slight edge before the disqualification.  Both fighters were guilty of rough tactics but did Chavez deserve to be disqualify, especially in lieu of the closeness of the fight?  Was Chavez robbed of a possible victory? I would say yes.

What we did see was Rios had trouble with Chavez when Chavez chose to fight in the center of the round but when he did manage to bully Chavez to the rope where he had the advantage.  Rios was the first admit in the post fights interview that he was not where he wants to be.

Rios showed that he is a tough fighter but somehow, one gets the impression that he has reached his full potential and there will be no more real growth. Rios is settling into a brawler that will bring fans to the arena but there is very little suggestion he will get much better and he will be vulnerable to welterweights who are boxers.

Meanwhile, one fighter showed why he might be the best light heavyweight. Sergey Kovalev fights resembled search and destroy missions and his battle against Blake Caparello was more than a championship bout.  Win and Kovalev gets to fight a big event fight against the ageless Bernard Hopkins.

The first round produced drama as Kovalev ended up on his butt as he got nailed with a straight left.  Kovalev found himself adjusting to Caparello’s southpaw style. The adjustment ended in the second round.  The “Krusher” Kovalev targeted his opponents with right hands with one landing to Caparello’s solar plexus that send Caparello down.  Caparello manage to get up and Kovalev simply attack his weaken opponent sending him down two more times before the referee ended the fight.

Kovalev next big fight is against Hopkins and while it is hard to bet against Hopkins, one has to view Kovalev may prove too powerful for the 49 year old Hopkins.