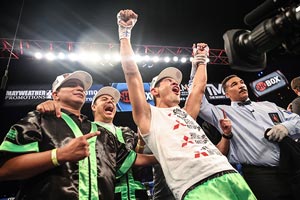 By David Martinez / dmboxing.com
In a rare Saturday night ShoBox telecast on August 30, 2014, from Las Vegas, hard hitting Rogelio Medina (33-6 / 27 by KO) scored a huge upset by knocking out previously unbeaten and world ranked J’Leon Love (18-1 / 10 by KO) in their super middleweight fight 다운로드.
The knockout came after Love missed with a left hand, as Medina connected with a series of vicious punches that dropped Love face-first to the canvas 잔소리 다운로드. Love attempted to get up but referee Tony Weeks stepped in and stopped the fight at 39 seconds into round three 윈도우10 windbg 다운로드.
This fight was supposed to be a tune up for Love, but Medina came to fight and pulled off the upset win 세븐나이츠 게임 다운로드.
The undercard saw two other super middleweight bouts; Badou Jack (17-1-1 / 11 by KO) won a unanimous “one-sided” decision over Jason Escalera (15-3-1 / 12 by KO), and Ronald Gavril (10-0 / 8 by KO) scored one knockdown en route to a seventh round knockout over Thomas Falowo (12-3 / 8 by KO).