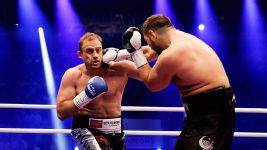 I am pleased to report that Steve Corbo, a guest writer who often contributes to this website, recently returned from Germany, where he was the Ring Announcer for a couple of title fights. The main event, on July 11, 2015,  was the WBA Heavyweight Championship Ruslan Chagaev (34-2-1 / 21 KOs) vs ds get. Francesco Pianeta (31-2-1 / 17 KOs) at the GETEC Arena in Magdeburg, Germany.

This was a voluntary defense for Chagaev and his first time in the ring since winning the vacant title via a majority decision over Fres Oquendo on July 6, 2014. While he was favored to come out on top in this one, it figured to be an interesting matchup 다운로드. At 6’5″ and 242 pounds, Pianeta seemed to have the physical tools to control the distance and dictate the tempo of the fight. That strategy went out the window as the 6’1″, 246 pound, Chagaev pressed the action from the opening bell 잊지말기로해 다운로드. He dropped Pianeta midway through the first round and never let him back in the fight. He dropped him a second time and Pianeta was counted out at 2:57 of the first round.
While blacked out in the U.S 다운로드. Market, the Chagaev vs. Pianeta bout, along with a WBO European Heavyweight Championship in which Michael Wallisch (15-0 / 10 KOs) stopped late substitute Fabio Tuiach (27-5 / 15 KO’s) in two rounds, were televised around the world by the German Network Ran Sat 1 content-disposition 다운로드.