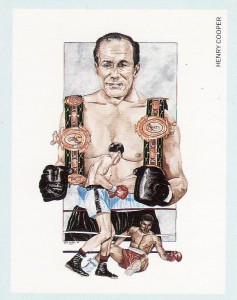 He came from a fighting family and by the time his boxing career ended in 1971 he was the most beloved British boxer of all time 네이버 움짤. Only once did he challenge for the world’s title but he dominated the British heavyweight scene for over fifteen years. His popularity soared even more after retirement and eventually the Queen of England knighted him 다운로드. Sir Henry Cooper was more than just a British fighter. He was a fine example of what British boxing is all about.

Henry’s professional career started in September of 1954 and he proceeded to win his first nine fights including an eight round points win over Joe Bygraves ssdt download. In Henry’s tenth bout he lost the first of many bouts due to an eye cut to Uber Bacilleri. He would later avenge that loss. The roller coaster career of Henry Cooper had now begun. He would drop a ten rounder to Joe Erskine and stop Brian London in one round only to lose in five to Peter Bates. 1955 was a rough year for Henry as Bygraves kayoed him for the British Empire title. Future world champion Ingemar Johansson then bombed him out. Joe Erskine then outscored him for the British title. Henry began to turn things around late in 1958 with a stoppage over Dick Richardson and a point win over respected American Zora Folley. He finally won the British and Empire titles by decision over Brian London in 1959. He halted Gawie de Klerk in an Empire defense and defended both titles by a fifth round stoppage of Joe Erskine. In 1960 Henry scored important decision victories of Roy Harris and Alex Mitiff. He again defended his titles by a fifth round stoppage of Erskine in March of 1961. On December 5, 1961 Henry suffered a major setback when Folley kayoed him in the second round of their rematch.

He came back to again stop Erskine in 1962 and Dick Richardson in 1963 setting the stage for a match with the undefeated Olympian, Cassius Clay. The facts of Cooper’s first bout with Clay have been well documented. His left hook knocked Clay down at the end of round four. A torn glove supposedly gave Clay time to recover. In reality it was a very brief delay. Cassius then came back to cut and stop Henry in round five. Henry bounced back to beat Brian London again, also winning the vacant European title in the process. Six months later he was stripped of the European title due to an injury. Henry would win five of his next seven bouts setting up a title shot and rematch against Clay (Muhammad Ali). The rematch was anti-climatic. Henry tried hard but Ali’s punches again ripped the tender skin above Cooper’s eye forcing a stoppage. Four months later, ex-title holder Floyd Patterson felled Henry.

It was again time to rebuild.  Henry went back to retaining his British and Empire titles by defeating Jack Bodell and Billy Walker. He then regained the European title winning on a disqualification from Karl Mildenberger. In 1969 Henry was to be matched with World Boxing Association champion Jimmy Ellis. The fight fell through because the British Boxing Board refused to recognize it as a world title fight. In a huff, Henry gave up the British and Empire titles. Later Henry relinquished the European crown due to an injury. Again in 1970 the amazing E’nry came back to regain the British and Empire titles from Jack Bodell. Later he regained the European crown by stopping Jose Urtain. On March 16, 1971 Henry met upcoming Joe Bugner with all three titles at stake. After fifteen well contested rounds, Bugner was awarded a very close and controversial decision much to the dismay of Henry. Cooper never boxed again.

Henry Cooper’s popularity had even crossed the Atlantic. He was a popular guest when he visited the International Boxing Hall Of Fame in Canastota, New York. A fitting tribute to this fine fighter and even finer gentleman.

One thought on “Sir Henry Cooper”