Bika gave the champion some problems early, but Stevenson came on and dropped the challenger in round six, after a strong round prior. Then Stevenson scored another knock down in round nine 다운로드. He suffered a bad cut over his right eye from a head butt in the final round, but it was never in doubt who the winner was to be when the fight ended after twelve championship rounds 갓오브곡괭이 3d. 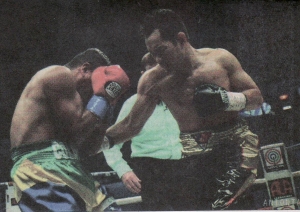 On March 28 at the Araneta Coliseum in Quezon City, Philippines former five-division world champion and 2012 Fighter of the Year, Nonito Donaire (34-3 / 22 by KO) resurrected his fading boxing career by winning the “vacant” NABAF super bantamweight title with a brutal two-round stoppage victory over Brazilian contender William Prado (22-5-1 / 15 by KO).

From the start of the fight, Donaire executed his game plan almost at will. He was brilliant with the jab, power punches, excellent footwork and blazing hand speed. The end came when the referee stopped the fight at the 2:16 mark of round two.

The win puts “The Filipino Flash” Donaire in contention for a possible title shot against a elite group of champions at 122 pounds, which include the likes of WBC champion Leo Santa Cruz; IBF champion Carl Frampton; WBA/WBO champion Guillermo Rigondeaux, the same fighter that handedly defeated him two years ago.