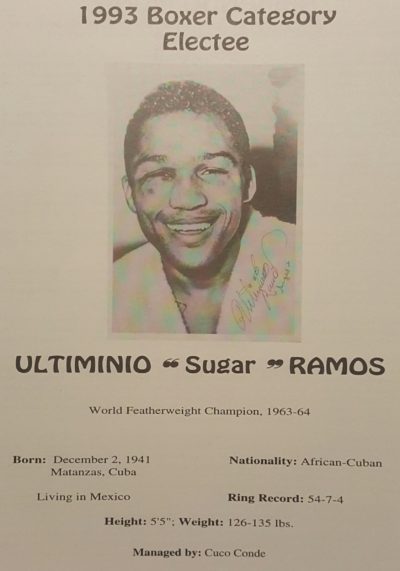 Boxing has lost a great champion 다운로드. On September 3, 2017, Cuban featherweight Ultiminio “Sugar” Ramos passed away in Mexico City from cancer complications. Born in Matanzas, Cuba, he was 75 years old 책 파일 다운로드.
Ramos is most remembered for two ring deaths, one inspiring a Bob Dylan song.  On March 21, 1963, Ramos and champion Davey Moore traded vicious punches in a scheduled 15 round featherweight title fight at Dodger Stadium in Los Angeles, California, that was witnessed by 26,142 in attendance 국기에 대한 맹세.

Moore won the early rounds, but Ramos came back strong as the fight went into the mid-rounds 초코플레이어 구버전 다운로드. The end came in the 10th when Ramos floored Moore and his head snapped off the bottom rope and landed on the ring canvas.  Tape footage reviewed by doctors didn’t blame the punches but the speed of his head striking the canvas; the ring having only three ropes with little padding contributed to this.

Moore left the ring after the defeat on his own under supervision with his handlers, but later in the dressing room went into a coma, and died two days later.
This was one fight that my friend George Latka, who was the referee, had a very difficult time talking about.
Sadly, Ramos was no stranger to tragedy in the ring, as five years earlier in Cuba he knocked out Jose Blanco resulting in his death.
Ramos defended the title that he won from Moore three times before losing it by a 12th round knockout to Mexican great Vicente Saldivar in 1964.
In 1966 Ramos moved up to the lightweight division and lost to Carlos Ortiz by knockout. In a rematch with Ortiz a year later, he was again knocked out and never fought for a world title again.
Personally, 1970 was a highlight year for me. In July, I witnessed the biggest upset at the historic Olympic Auditorium when unbeaten heavyweight and top prospect Ken Norton lost by knockout to Jose Luis Garcia. The following month, I saw what I consider the 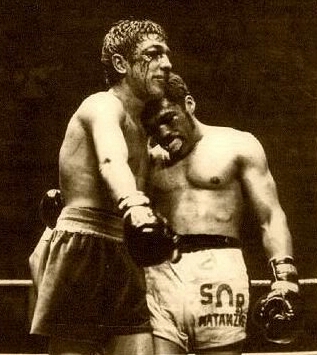 greatest fight at that venue, which was Sugar Ramos losing a 10 round split decision in an action packed lightweight fight versus Mando Ramos.
Sugar Ramos was once in what I consider to be one of the greatest stable of fighters in one gym at one time. Along with Ramos were Jose Legra, Baby Luis and Jose Napoles, all Cuban boxers.
Ramos started his boxing career at the age of 15, retired in 1972 with a ring record of 55 wins, 7 losses, and 4 draws, with 40 by knockout.
He was inducted into the World Boxing Hall of Fame in 1993, and into the International Boxing Hall of Fame in 2001.
May his soul rest peacefully in heaven with the Lord.