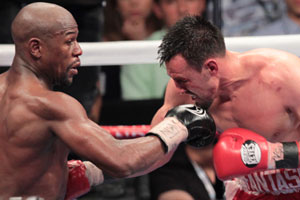 By Tom Donelson
Member Boxing Writers Association,  International Boxing Research Organization, and contributes to numerous boxing publications
Floyd Mayweather came into this fight as the favorite but at 36 years, the question was for Mayweather, would father time finally catch up with him?  Robert Guerrero was one of those fighters who could box or brawl and the question that remained, would we see the boxing Guerrero or the brawling Guerrero who mauled Andre Berto 이집트왕자 2 다운로드?
The first bout featured undefeated J’Leon Love fighting Gabriel Rosado and the first half of the fight saw Love dominate the fight with his jab which opened up his arsenal.   If the first half of the fight was Love, The second half belonged to Rosadao, who managed to knock Love down with an overhand right.  He continued his pressure throughout the second half of the fight to tighten the scorecard.   The final round saw both fighters pound on each other to conclude a close bout.  Love won a close split decision , winning 95-94, 97-92 on two cards and Rosado winning on the other card, 95-94 아이폰 유튜브 영상 다운로드.
Bout number two was Leon Santa Cruz fighting Alexander Munoz for the USBA Super bantamweight title.  Santa Cruz took control of this early as he nailed Munoz with a three punch combination in the opening round 롤러코스터3. In the third round, Cruz sent Munoz down with a one-two combination after dominating the round. From there it was a matter of time as Cruz finished Munoz in the fifth with a left hand.
Daniel Ponce De Leon fought Abner Mares for  De Leon WBC featherweight division championship.  Mares, the WBC Super bantamweight titlist, was moving up  for the featherweight title.
While De Leon southpaw stance gave him an advantage in the first round, a Mares left-right hand sent De Leon down in the second round.  While he was taking rights hand in the third round, Mares managed to land a left that stunned De Leon and sent him stumbling into the rope.
In the fifth round, Mares scored with a five punch combination but he got nailed with a De Leon straight left and De Leon ended the round by doing the pressuring.   He continued to pressure the following round but De Leon pressure appeared to be ineffectual as Mares scored solid left hooks to the head and body.
Mares continued to use his right hand to gain the upper hand of the fight in the seventh round. Mares connected with his right hand in the ninth round and De Leon countered with his left but another Mares right sent De Leon down for the second time in the fight.   Mares forced De Leon to the rope after De Leon got up from his knockdown and he landed more punches; forcing the referee to stop the fight.   Mares now claimed a featherweight title.
The main event now began and Mayweather found a home with his right hand in the opening two rounds but in the second round, Guerrero managed to score with his left while attempting to get rough in the clinch in an effort to turn this fight into an alley brawl.  This continued into the third round, but Mayweather defensive wizardry deflected many of Guerrero and he countered with his right hand.
Guerrero attempted to pressure throughout the fourth and fifth round as he manages to scores with straight left to the body but Mayweather right hand cracked Guerrero head as he able to score against the southpaw Guerrero.
Guerrero continues to stay in front of Mayweather but Mayweather defense frustrated Guerrero and Mayweather jabbed and moved out of harms’ way.  His lead right continues to score and after six rounds, it would appear that Mayweather had a big lead on the scorecard.
Throughout the seventh round, Mayweather used clinches to go with his counters to disrupt Guerrero’s pressure. Just as the previous six rounds, Guerrero offense has proven to be feeble against Mayweather’s defensive skills.  So far, Mayweather defense proved the decisive and he didn’t look his age.
Beginning at the eighth round, Mayweather left hooked off his jab and then pounded Guerrero with two rights.   Mayweather had not hurt Guerrero with his punches but he threw enough right hands to keep the fight in his favor. A end of the round,  a Mayweather uppercut and three right hands cut open left Guerrero eyes.  In between the eighth and ninth round, Mayweather late eighth round rally forced the ring doctor to examine Guerrero’s eyes.
While Guerrero was still attempting to pressure Mayweather in the ninth, Mayweather sharp right kept nailing Guerrero.   Mayweather continued to out worked Guerrero and Guerrero  seemed unable to score much throughout the tenth round and going into the championship rounds, Guerrero needed a knockout.
Guerrero didn’t get his knockout but instead, he continued to receive a boxing lesson from Mayweather.  While Guerrero was not hurt by Mayweather combinations but he kept getting nailed by right hands and left hooks.  Mayweather used his mobility for part of the twelfth round to run out the clock and then he landed those accurate right hands.  Mayweather combinations simply put a punctuation mark on this fight and he won an easy unanimous decision.
One reporter summed up the fight when he wrote, “Guerrero still there which is a tribute to his courage but he looks like a club fighter by comparison with the master.”  This quote summarized the fight and Mayweather mastery.