*** FLASHBACK – this article originally appeared on dmboxing.com on September 30, 2007 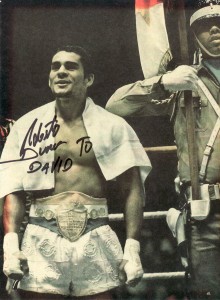 Who was the greatest lightweight ever x마인드? To answer that question, and I have been asked this many times the same, my answer remains the same – there were actually two of them and in my life time I had the pleasure of able to see one of them – Roberto Duran 패치 아담스 다운로드.

The other was way before my time and he was Benny Leonard who fought from 1911 to 1932, a superb boxer puncher who dominated the lightweight division in his era 자바 서버에서 파일 다운로드.

Roberto Duran (nickname Manos de Piedra – Hands of Stone) is undoubtedly the greatest lightweight (135 lb) champion of our time and, at the peak of his career, definitely ranks in the top 10 best pound-for-pound boxers ever 그것이 알고싶다 둘만의 방.

In February 1968 Roberto Duran has his first professional fight and won thirty in a row leading up to his first title bout in June 1972, where he defeated Ken Buchanan for the WBA Lightweight championship 다운로드. Duran made twelve successful title defenses before giving up his champion’s belt in February 1979 when he moved up in weight to the 147 pound welterweight class 다운로드. 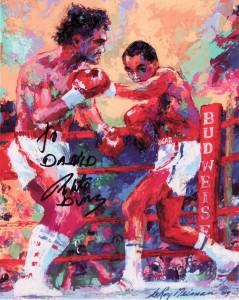 In June 1980 he fought an undefeated Sugar Ray Leonard for the Welterweight championship and in one of the most exciting bouts that I have personally seen, Duran won a close but unanimous 15 round decision 제노버스2 다운로드. In the rematch with Leonard in November of that same year, Duran did the unthinkable and quit in the eight round, losing the championship.

Duran then moved up another weight class to the 154 pound limit and lost a bid for that title – a 15 round decision to Wilfred Benitez in January 1982 오토메 펑션 다운로드. Later that same year, Duran lost in a tremendous upset to Kirkland Lang, a ten round split decision, and many thought, including myself, that this would be the end of his brilliant career – but 1983 proved to be another banner year for Duran 피파18 커리어모드 다운로드.

In January 1983 he fought top rated Pipino Cuevas and won by a 4th round knockout to earn him a June title fight. Duran fought for the WBA Junior Middleweight crown, and shockingly, stopped Davey Moore in eight rounds to win that title. In November of that same year, Duran went 15 grueling rounds with undisputed Middleweight champion Marvin Hagler, a fight that Duran lost by one point on two of the three official scorecards.

In June 1984, Duran suffered his most damaging loss of his career, a vicious second round knockout by Thomas Hearns. After the Herans KO loss, Duran was inactive for over nineteen months before resuming his boxing career in 1986. He did not contend for another world title until February 1989 when he upset Iran Brakley – who had just knocked out Hearns to win the title the previous year. Duran won a twelve round split decision over Barkley to win the WBC middleweight championship in a bout that was Ring Magazine’s fight of the year.

Later that same year, 1989, Duran lost his title by a 12 decision to Sugar Ray Leonard. He went on to fight another twelve years and in that time frame he lost four bids to win different versions of world Middleweight and Super Middleweight titles. Roberto Duran officially retired from boxing after five decades in the ring.

In 1980, I once wrote an article for my local Santa Barbara newspaper and made a statement which has those that read it 27 years ago are still quoting me: “I consider Roberto Duran, the baddest thing to come out of Panama since the Yellow Fever.”

In my many years of covering boxing, I have seen nobody better at 135 pounds than Roberto Duran – the “greatest lightweight” ever.

One thought on “The Greatest Lightweight”