The fight was twelve rounds of toe-toe, non-stop action, with each fighter giving it their absolute best 다운로드.

I had Vargas winning the early rounds, but midway in the fight you could just see Salido coming on and finishing the stronger of the two. 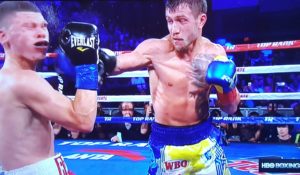 On Saturday night June 11, 2016 at the Madison Square Garden Theater in New York, Vassyl Lomachenko (6-1 / 4 by KO) won by sensational 5th round knockout over Roman “Rocky” Martinez (29-3-3 / 17 by KO) to win the WBO super featherweight championship.

Lomachenko completely dominated Martinez from the opening bell using superior speed and calculated punches.  The end came in the fifth round with Lomachenko landing a perfect left upper cut, followed by a beautiful right hook. The time was 1:09.

With the win, Lomachenko becomes a two-division title holder in just his seventh professional fight, he previously won the WBO featherweight title in 2014.