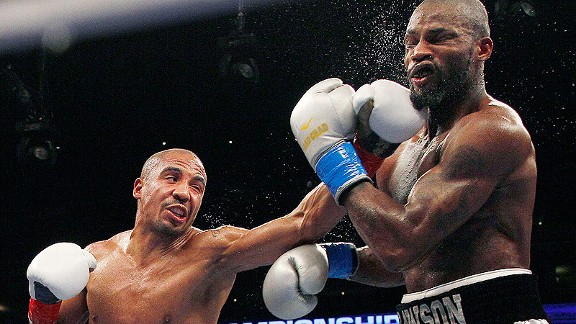 By Tom Donelson
Member of Boxing Writers Assc 다운로드.
Andre Ward and Chad Dawson both took a significant risk as they decided to fight each other in a bout of super star fighters at their peak.  A natural right hander, Dawson fights as a southpaw so he can use his more powerful right hand whereas Ward is a natural southpaw who fights from an orthodox position.  This style would prove decisive as Ward’s left hand consistently hurt Dawson in the fight 위글위글 다운로드.
Ward tried to go to the body in the opening minute as Dawson began a little more aggressively with his jab,  so the first round was even 다운로드. In the second round, Dawson landed three right hooks and Dawson right hand found its target as he peppered Ward who tried to sneak inside Dawson’s jab.   Ward nailed Dawson with a quick left hook in the final thirty seconds of the third round to send Dawson to the canvas in a round that was close up to that point.    After this knockdown, the fight changed and Ward took control 다운로드.
Ward hit Dawson with a quick left hook at the beginning of fourth round that sent Dawson to the canvas for the second time and for the next two minutes, Ward hammered Dawson with shots to the body and head.  Ward took risk as he left himself open as he attempted to end the fight and with a minute left, Dawson connected with a straight left that got Ward respect.  Ward retreated and took a few steps back for the next thirty seconds before attempting one more rally to end the right.
The beginning of the fifth round, both fighters retreated to a more tactical fight as both fighters connected on a few shots but the action lacked the drama of the previous two rounds. Ward dictated the pace through the sixth round with jabs followed by hooks while Dawson looked perplexed and tentative.  With half of the fight already pass, Dawson found himself behind on the cards.
Throughout the seventh and eighth round, Ward got chest to chest as he managed solid body shots with hooks and uppercuts as Dawson found it difficult to counter inside.  After the eighth round, Dawson’s trainer John Scully told his fighter, “You won’t win a decision here; you have to win this fight and go after this guy.” Scully urged his fighter to not be satisfied with just finishing the fight.  Dawson went toe to toe but got nailed with solid right hands by Ward.  Dawson legs went rubbery as a result of one right hand but he showed his toughness as he stood up to Ward’s best shots.  By the end of the ninth round, Ward connected on four times as many power punches as Dawson.  Dawson refused to give up in the tenth round as he attempted to fight but he seemed a half a second behind whereas Ward continued to dominate with left hooks.   With thirty seconds left, Ward landed a left hook that staggered Dawson and Ward followed up with series of body shots and right hands forcing Dawson to take a knee.  Dawson came up from his third knockdown and looked bewildered like “Where am I?”  The referee stopped the fight.
Ward defeated the best light heavyweight in the world as he showed all of his skills.  The key to the victory was Ward ability to get inside of Dawson’s jab and he did just that.  Dawson is a very good fighter but on this night, he faced an elite fighter who is looking toward a Hall of Fame career.  Ward connected on nearly five times as many punches and was three times as accurate as he showed great defensive skills as well as a varied offensive arsenal.
For the past three years, Ward has marched through the best of the Super Middleweights and when Dawson agreed to fight him, this provided Ward a new measuring stick to be judged.    Ward knew that he was facing a very good fighter in Dawson and he took the risk needed to win. Dawson noted that Ward was faster and stronger than he thought and then other fighters probably felt the same way when they got in the ring.
Ward is be one of the world’s best pound for pound.
Vitali wins again and Mattysse finally gets his title! 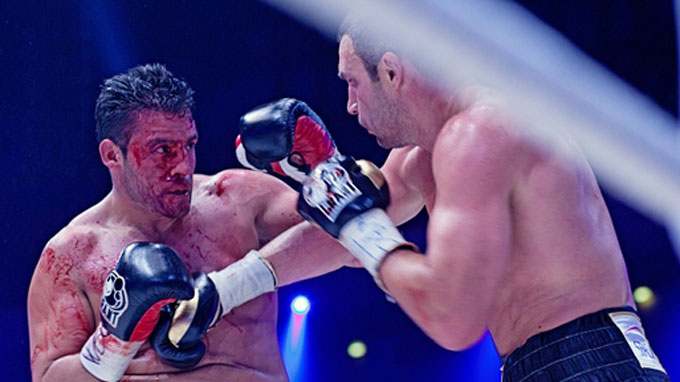 Vitali Klitschko began his bout against Manuel Charr by peppering his opponent with jabs and right hands while Charr put himself in a turtle shell and hope that he could survive.  He almost didn’t survive round two as the bell saved him after a Klitschko’s right sent down for the count.  Charr occasionally came out of shell to hit Vitali Klitschko but that was a rarity.
In the middle of the fourth round, Charr right eye open in river of blood from consistently being hit from Klitschko’s left jab.   With nearly half of the round left, the referee took Charr to the corner doctor and the Doctor stopped the fight.  Charr felt cheated but he was behind on the score card and in the early rounds; Charr was not hurting Klitschko. This was another domination by the Klitschko’s  brothers; who treat the Heavyweight division as their personal property.
Before the super fight between Andre Ward and Chad Dawson; the hard punching John Molina attempted to wrestle Antonio DeMarco’s lightweight title.  The fight lasted all of 55 seconds as DeMarco nailed Molina with a straight left and Molina staggered back with rubbery legs.   DeMarco trapped Molina on the rope and ripped left hooks and right hands as Molina sat on the rope.  DeMarco kept nailing Molina with shots to the top of the head and Molina’s ear.  Molina threw three punches but he did not fight back after that and the referee stopped the fight.
Knockout Lucas Mattysse takes on Ajose Olousegun in a main event on Showtime that became a reality when the original main event between Devon Alexander and Randall Bailey was canceled.  Before the Mattysse-Olousegun fight, j’Leon Love fought Ramon Valenzuela in a battle of Middleweight.   Love used his jab in the first round as he controlled the real estate between both fighters.  Valenzuela managed to land a few clubbing rights over Love’s jab but in the second and third round saw Love to continue to jab while setting up a right hands.
As the fight reached its half, Valenzuela managed to cut the distance but Love still dominated the action with his quicker hands.  In the seventh round, Valenzuela tried to turn this fight into brawl as physically pushed Love into the rope but with a minute left, Love raked Valenzuela with combinations.  Valenzuela was deducted a point for rough tactics at the end of the seventh round and the eighth round began with Love throwing punches from all angles but Valenzuela attempted to pick Love up but the referee, Jay Nady, disqualified Valenzuela for more rough tactics.
Mattysse was up against a slick boxer Ajose Olousegun and in a close active round, Olousegun threw slick combinations near the end of the round that nailed Mattysse and Mattysee connected with a solid right as the bell rang.   Mattysse continued the pressure in the second round as he nailed Olousegun with a series of body shots and solid rights after trapping him on the rope. During the fourth round, both fighters exchanged big punches as a Mattysse right hand jolted Olousegun but Olousegun came back with combinations to counter Mattysse.  Olousegun showed his toughness in the fifth as Mattysse connected with a left hook that sent Olousegun head 180 degrees and caughtt Olousegun with solid combinations on the rope.  While Mattysse held most of the cards in the fight through the first eight round, Olousegun showed his own toughness as he would throw solid combinations to score but he lacked Mattysse power.
The ninth round was a good example while Olousegun boxed and connected on combinations the first half but over the second half of the fight, Mattysse dominated as he unleashed left hooks to slow Olousegun down while trapping Olousegun on the rope.  He ended the round with a two left hooks and right hand that staggered Olousegun.
During the tenth round, Mattysse followed Olousegun around the ring as he nailed Olousegun with one shot after another.  With minute left, Mattysse connected on a left hook and followed up with the right hand that send Olousegun down.  The referee stopped the right when it clear that Okousegun could no longer continued after receiving a barrage of power punches.  Mattysse now has his share of the junior welterweight title and finally after losing two close decisions that could have gone his way, he finally got his title.