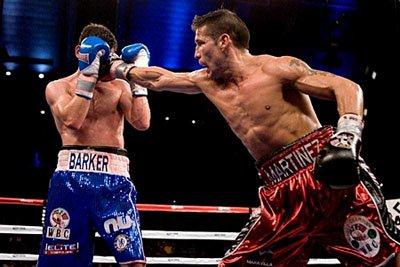 Sergio Martinez defended his title as king of the Middleweights against undefeated British Middeweight Darren Barker but before they were to fight, Brian Vera fought Andy Lee, who was hoping to revenge his only lost to Vera earlier.
Andy Lee began the fight jabbing in the opening minutes as Vera tried to find a way around the jab coming his direction.  Over the second half of the opening round, Lee nailed Vera with two solid straight left from his southpaw stance to win the round 파워 포인트 2010 한글판 다운로드.

In the second round, Lee control the real estate as Vera failed to change much with an occasional bull rush as Lee merely side stepped Vera.  Near the end of the round, Lee nailed Vera with a straight left that sent Vera on his seat after a Vera’s right hand missed.

Lee used Vera aggressiveness against him as Vera became open to Lee counters including solid body shots, rights hooks and a straight lefts over the first three rounds 페이스북 내정보 다운로드. Lee fought smartly as he used his height and jab to control real estate between him and Vera plus it allowed Lee to counter effectively.

In the fourth round, Vera did managed to connect on a couple of rights but Lee defensive skills improved over his last fight with Vera as he covered up and blocked many of Vera shots.  During the stretch run of the round, Lee connected with solid combinations and accidental head butt open up a cut over Vera’s left eye.

By the end of the fifth round, Lee was pitching a shutout and now he had to stay standing to win a very big fight.   At the start of sixth round, Lee continued his mastery and at the end of the round,  a right hook nearly sent Vera down a second time when Vera right glove touched the canvas 이카로스 다운로드. (The referee did not see the glove hit the canvas and if he did, he could have counted that as a knockdown and giving Lee his second 10-8 round.)

With a minute left in the seventh round, Vera had his best rally as he launched three or four body shots followed by a uppercut that penetrated Lee defense but Lee countered with some shots of his own including a nasty right hand hook.  Near the end of the eighth round, Lee and Vera exchanged punches as Vera touched Lee with three rights but Vera got nailed by Lee combinations in a close round 다운로드.
The ninth round was as close as the eighth round but while Vera connected on body shots and right hands, Lee countered once again with his straight left.  Vera body shots made the last rounds closer and exciting but it was case of too little and too late.  Vera managed to connect on power punches but he left himself open for Lee’s straight left.  The judges gave many of those close rounds to Lee as Lee won an easy decision.  Lee got his revenge and reinforced his championship contention.

As for the main event, Martinez merely fought tactical first round as he nailed a couple of his patented left hand. As the second round progressed, Martinez started to unload his punches as Barker covered up without attempting to throw many punches.   Barker early strategy was to wait for opening as he tried to get closer to Martinez and then maybe wear down Martinez 다운로드.

A Barker right bloodied Martinez as Martinez moved away from the pursuing Barker, who started to open up in the fourth round.  Martinez outworked Barker but Barker did managed to connect on some solid shots in the fourth round.
After the sixth round, Martinez was winning the fight but looked uncomfortable as the young British fighter stayed in front of him and pursuing  him but Martinez flurries were allowing to stay in front of his opponent.   Barker biggest problem was that he wasn’t throw enough punches to win rounds and even after his corner extorted him to let loose with his punches,  Barker showed reluctance.  Going into the last four rounds, Barker was behind on the scorecard and the covering up strategy designed to get him to late rounds was working in the sense he was still standing.  Barker biggest problem that he had to knock Martinez out to win and to do that, he had to throw punches.   Best comment of the night came from Jim Lampley as he noted that Barker was winning the fight with his feet and losing it with his hands.

With a minute left in the round, Martinez staggered Barker with a right hand hook that sent Barker swirling around.  After that punch, Martinez threw combinations upon combinations but he couldn’t finish Barker off.  In the opening minute of the eleventh round, Martinez went to the body and then unleashed combination while Barker threw a right hand that connected. Martinez ripped off combinations and a right hand hook off Barker’s glove sent Barker down for the count. Martinez won the fight with a late round knockout.
Martinez continued to dazzle as a Middleweight and despite fighting with a bloodied swollen nose, he outworked his challenger.  Martinez broke his opponent down in his unique way with body shots and a devastating right hook.   Martinez showed he still is the best Middleweight.

Undefeated Darley Perez started the big night of SHOBOX boxing against veteran Oscar Meza in the lightweight division.   Meza probably made boxing history as he became the first boxing who was sponsored by a donut shop as he even had the symbols of coffee and donuts on his trunk.    Perez began the first round with accurate punches as he merely deflected much of what Meza had to offer.  Meza had one moment in the opening stanza as he trapped Perez on the rope but Perez merely spin off the rope with a combination.

Perez continued to hit Meza at will in the second round and with minute left, he scored with a right that sent Meza reeling for a brief moment and then an uppercut sent Meza’s head spinning back.  By the third round, the Perez thundering right bloodied Meza nose, who continued to march right into Perez wheel house.   Meza finally connected on a big right on his own in the fourth and for first time, Perez staggered backward as Meza tried to add to the damage.  Perez managed to comeback in the second half of the round as he jabbed Meza and occasionally held to get his wits back.

In fifth round, Perez started to get control back in the fight as he jabbed Meza and Meza’s face started to reddened.  Perez nailed with Meza with another right hand that spin Meza head some 180 degrees.  During the sixth round, Perez used body shots to weaken Meza and throughout the entire round, Meza retreated as he simply took one punch after another.  As the round ended, Meza corner ended the fight as their fighter had taken enough punishment.

For the main event, Ajose Olusequn fought Ali Chebah in a big bout for both fighters, as the winner would find himself in a title shot. On top of that, both fighters were making their American debut.  Olusequn started out aggressive by throwing body shots while occasionally throwing head shots.   While Chebah alternated with Olusequn on being aggressive, Olusequn was the more accurate puncher.
In the second round, Olusequn started aggressively but Chebah changed some of the early momentum by being even more aggressive but the more effective punches were thrown by Olusegun.  At the beginning of the third round, Chebah got careless and got caught with some solid shots.   At the minute mark, Olusequn  knocked Chebah down with a straight left and few seconds, Olusequn sent Chebah down a second time.   At the thirty seconds, Chebah nailed Olusequn with a solid right for his best punch at that point of the fight.

At the beginning of the fourth round, Olusequn continued his assault with punches that sent Chebah head spinning in 180 degrees but halfway through the fourth round,  Chebah nailed Olusequn with some solid rights that forced Oluesqun to retreat  but Chebah may have won his first round of the bout.  Chebah pursued Oluesqun around the ring and actually throwing the more accurate punches.
Going into the second half of the fight, Chebah won the previous three rounds as he started to land his own power shots and Chebha landed some solid rights in the seventh round and he may have reduced the margin build up by Oluesqun two knockdown round.

Chebah once again scored with a solid right that shook Oluesqun but one failure that showed up for Chebah was his lack of ability to cut off the ring.  This allowed Oluesqun to escape and pop his own combination. What momentum lost by Oluesqun in the sixth round, he recaptured by the ninth.    Throughout the tenth round, Oluesqun continuously nailed Chebah with quick combinations as he moved into position to strike effectively.

Chebah fought the eleventh round as he attempted to hurt Oluesqun, who landed some effective punches  to counter the Chebah’s efforts. This action produced an exciting round.  Olusequn started the twelfth round by throwing some solid combination while Chebah tried to set up Olusequn for one big shot.  Oluesqun beat Chebah to the punch in the final round and he sealed Chebah fate. Olusequn won an easy decision and the key to Oluesqun victory was his ability to maneuvered Chebah into position for solid combinations.  Chebah failure to cut off the ring allowed Oluesqun to escape damage and this provided Oluesqun opportunity to counter.  This victory allowed the Nigerian Oluesqun to watch in line for the Erik Morales title.