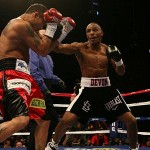 This weekend feature many stories from Devon Alexander trying to get back into championship contention while young fighters onShoBox: The New Generation, making progress toward championship belt but the most intriguing was Manuel Perez story.   Perez works two part time jobs and last Friday night, he faced a more experienced and stronger fighter in Edgar Santana.  Perez turned this fight into a desperation battle within the trenches as he challenged Santana in essentially hand to hand combat with gloves 다운로드.

Throughout the fight, Perez used his hand speed to pepper Santana with body shots followed by head shots while taking Santana hooks ripping into his body.  Perez chose to win the fight and this was a case of will and heart beating a more talented fighter.  Perez got stronger as the figh entered the crucial rounds and won unanimous decision and maybe, he might pick up a bigger payday for his next bout 다운로드.

Juan Carlos Burgos viewed his fight with former champion Cristobal Cruz as a stepping stone but it nearly became a disaster.   Cruz kept moving forward throughout the bout and fell victim to Burgos pot shots and counter.  In the middle round, Burgos look like he was taking command and that included a quick, short left hook that sent Cruz down and Burgos dominated the seventh round but by the eighth round, Cruz got back into the fight and a wide left hook delivered by Cruz sent Burgos down in the ninth and Burgos was hurt.  Cruz continued his assault in the final round and it looked like a Cruz’s victory but Burgos escaped with a close unanimous decision 다운로드.

On ShoBox, more drama ensued as Deandre Latimore pounded Milton Nunez  for most of the first eight rounds but in the ninth round,  Nunez’s  right hand sent Latimore down and Latimore spent a harrowing minute surviving further Nunez’s onslaught and he hanged on to win a majority decision 다운로드.

The main event featured undefeated Jesse Vargas against veteran Lanardo Tyner in an ugly tough fight that featured three low blows, no point deductions and massive amount of body shots.  Vargas on occasion would box when he needed a break from the inside pounding but he got the better of the inside battle against Tyner and won an easy decision on paper.  Each round was competitive but Vargas was the better fighter throughout the night and won his first fight as a welterweight.  Vargas showed guts and the flexibility to fight but is he ready for contention 위대한 계춘빈 다운로드?

HBO featured their own stories beginning with Adrien Broner, the reigning WBO Super featherweight champion against the undefeated Elroy Perez. Broner is a superstar in the making and he showed why against Perez.  His quick left hooks nailed Perez repeatedly and often twisting Perez head with every shot.  Broner was just too good and too powerful for Perez, who had no answer for Broner.

Perez never could get his offense off track as it appeared his punches fell short while he was receiving Broner left hooks and right hand COD.  He couldn’t escape the onslaught and in the fourth round a left hook followed by a right sent Perez down for good. Broner, never lacking for confidence, mention that in the post-fight interview that it was a case of a good fighter versus a great fighter.

Over the past year, Devon Alexander had a rough year with a lost to Tim Bradley and a split decision victory over Lucas Matthysse that many felt he lost.  Alexander decided the time was now to move up to Welterweight division and he fought Marco Maidana, a leading junior welterweight contender.  Maidana is a slugger but Alexander put it is all together for this night as he schooled Maidana.   The fight started ugly but as the fight progressed, Alexander found his rhythm and he popped combination as he beat Maidana to the punch.  In the sixth round he stunned Maidana with a straight left and the two got tangled up before Maidana hit the ground.  It was not called a knock down but it was clear who was the master, Devon “the Great” Alexander as he put his career back on track and he once again became a contender but this time it is in the Welterweight division. As for Maidana, he stated after the fight that he was going back to the junior welterweight. Alexander is a young fighter who found his career stalled but at 25, he found new dedication and new answers as he moved back into rarified air of title contention.

Macro Huck nearly derailed Alexander Povetkin championship dreams.  Technically, Povetkin is a “regular WBA” champion but the real champions are the Klitschko’s brothers, so Povetkin is a paper title with no real meeting.  Huck, the former Cruiserweight champion,  and Povetkin pounded each other as both gave everything in the ring with Povetkin on occasion looking like he would be stopped but he managed to survive.  Povetkin won a split decision but many felt that Huck could easily been declared the winner.

There were many stories, a fighter who struggles with two jobs and finding time to train and the will to win a big fight on ESPN and a former champion regaining his stride.  Boxing saw the unexpected and the expected happen with one dramatic fight between two heavyweights with a possible date with one of the Klitschko’s brothers, the true champions.