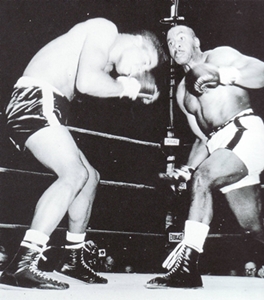 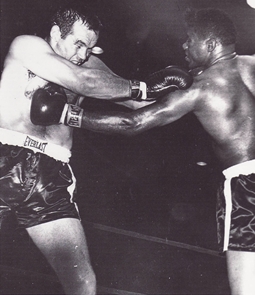 Champion Ingemar Johansson vs. Sonny Liston was a fight that very well could have happened. After Ingo shocked Floyd Patterson to win the title in 1959, he was the “man.”

At this time Sonny was just beginning to establish himself as a heavyweight to be reckoned with 다운로드. By the time Floyd and Ingo met again in June of 1960, Sonny had defeated Nino Valdez and Cleveland Williams twice. One month after Patterson – Johansson II, Sonny stopped the clever Zora Folley. Then two months later he outscored the classy Eddie Machen. There was little doubt that Sonny Liston would have to be dealt with.
Think about this:  What if Ingemar would have won his 1960 bout with Patterson Voxox download? There would have been no need for a 1961 rubber match with Floyd. Enter Sonny. He would have been the most logical contender. So how would a match between Johansson and Liston panned out in June of 1961?

ROUND 1: They both come out jabbing. Ingemar is pawing with his jab using it as a range finder for his “Thunder Of Thor” right hand 다운로드. Sonny is putting more behind his jab and they are snapping Johansson’s head back. They are finally on the inside and Ingo is holding his own. After the referee breaks them, the two again are in a jabbing contest. Finally, Johansson lets the right hand fly over Sonny’s extended jab and it connects. It actually sends Sonny back a step. Ingo moves in but he is met by a solid jab and a thudding right to the body 다운로드. They wrestle around on the inside at the bell.
Liston’s jab won a close round for him but Ingemar landed the first damaging punch.
ROUND 2: Sonny is really pumping the jab and has Johansson on the defensive. Ingemar is trying to get under the jab but on the inside Sonny is landing heavy, looping body shots that hurt. Ingo is game and he is trying to launch his vaunted right hand 트와일라잇 이클립스 다운로드. Sonny’s jab is keeping Ingemar of balance and unable to get the full power behind the right. Ingo’s nose is bleeding and he has several large red welts on his midsection.
Liston controlled the round and is now up two rounds to none.
ROUND 3: Sonny is sticking to his game plan and the jab is doing a lot of damage 중영사전 다운로드. Ingemar keeps trying but he is telegraphing the right hand and Sonny is paying attention. Finally Ingo gets one in and Sonny again stumbles back a few steps. The crowd is on their feet. As Johansson moves in, Sonny lands a monster left hook to Ingo’s jaw that sends him to his knees. The courageous Johansson is up at eight but Sonny shuffles right after him. Ingemar lets a desperate right fly and it catches Sonny on the top of head and stops Sonny’s attack for the moment. Liston shoots in a few jabs as the round comes to a close.
With the knockdown Sonny gets a 10-8 round.
ROUND 4: Ingemar comes out winging but does not land any effective shots. Sonny remains calm and starts planting that jab again. Ingo is starting to become weary and Liston starts doing more work on the inside. Johansson tries to tie Sonny up but Liston will have none of it. Sonny works Ingo to the ropes and he is just raking him with body blows. Finally a tremendous uppercut to the jaw sends Ingo sprawling to the canvas. Johansson shows true grit as he is up at nine. The referee hesitates a moment and then waves the two fighters together. Liston walks back in and is literally throwing bombs. Ingo is trying to survive but each shot lands with a telling effect. A left hook slams into Johansson’s jaw and he sags to the canvas just as the referee has grabbed Liston from behind to hold him back.
It’s over. The bout has been stopped at the 1:58 second mark of round four. The winner and new champion of the world, Sonny Liston!
Ingemar is helped up by his corner men and led back to his corner. He appears to be OK. A good sportsman, Sonny comes over to check on Ingo and they shake hands. As Sonny is being interviewed he praises Johansson’s courage. He also said that Ingemar was the hardest puncher he ever met including Cleveland Williams. Sonny even admitted that he was stunned a few times.
Johansson when interviewed seemed disappointed in losing his title. He said he could not believe Sonny absorbed his best shots and kept coming. He also said that Liston hurts you every time he lands a punch no matter where it lands. He predicted a long reign for Sonny and expressed no interest in a rematch.