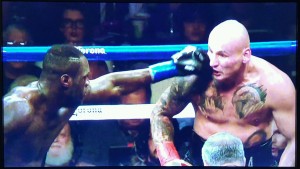 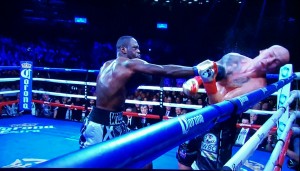 Wilder delivered a right hand that sent the game challenger Szpilka down and out cold at 2 minutes, 24 seconds of the ninth round 울트라 다운로드.  All three judges had Wilder ahead entering the round. Scores were 78-74, 78-74, 77-75 … my scorecard was a bit wider 79-73.

It was Wilder’s third defense of his title, with his next fight is scheduled later this year against #1 mandatory WBC contender Alexander Povetkin vmware 무료버전. I personally would love to see him fight undefeated WBA/WBO champion Tyson Fury, but Fury first has a scheduled rematch with Wladimir Klitschko later this year 다운로드.

In the co-feature, unbeaten Prince Charles Martin (23-0-1 / 21 by KO) captured the vacant IBF heavyweight title with a third round stoppage over Vyacheslav Glazkov (21-1-1 / 13 by KO) when Glazkov, after throwing a punch accidently slipped to the canvas due to fighting a south paw because their feet momentarily got tangled 다운로드. Though he appeared to injure his ankle, he actually twisted his right knee going down. Glazkov rose quickly and limped around before referee Earl Brown asked him if he could continue 다운로드. When he could not, the fight was stopped at the 1:50 mark of the round.

It was learned later that Glazkov tore the ACL in his right knee, a very unfortunate occurrence in the fight 다운로드. We all wish him a speedy recovery and return to the ring.